Inside the Mind of a Child with Autism

Therapists who specialize in autism often use a child’s own interests, toys or obsessions as a way to connect, and sometimes to reward effort and progress on social skills. The more eye contact a child makes, for example, the more play time he or she gets with those precious maps or stuffed animals.

But now a group of scientists and the author of a new book are suggesting that those favorite activities could be harnessed in a deeper, more organic way. If a child is fascinated with animated characters like Thomas the Tank Engine, why not use those characters to prompt and reinforce social development?

Millions of parents do this routinely, if not systematically, flopping down on the floor with a socially distant child to playact the characters themselves. 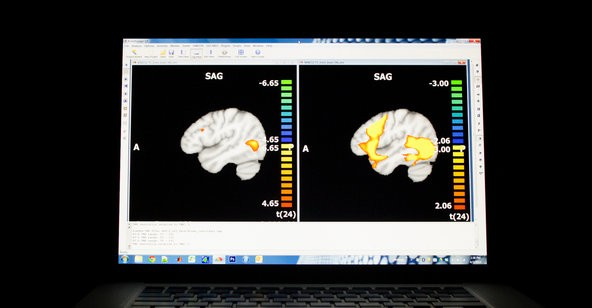 Christopher Capozziello for The New York Times.
M.R.I.s of an autistic child’s brain before and after
pivotal response treatment at Yale.

“We individualize therapy to each child already, so if the child has an affinity for certain animated characters, it’s absolutely worth studying a therapy that incorporates those characters meaningfully,” said Kevin Pelphrey, director of the child neuroscience laboratory at Yale.

He and several other researchers, including John D. E. Gabrieli of M.I.T., Simon Baron-Cohen of the University of Cambridge and Pamela Ventola of Yale, are proposing a study to test the approach.

The idea came from Ron Suskind, a former Wall Street Journal reporter whose new book “Life, Animated” describes his family’s experience reaching their autistic son, Owen, through his fascination with Disney movies like “The Little Mermaid” and “Beauty and the Beast.” It was Mr. Suskind’s story that first referred to ‘“affinity therapy.” He approached the researchers to put together a clinical trial based on the idea that some children can develop social and emotional instincts through the characters they love.

Experts familiar with his story say the theory behind the therapy is plausible, given what’s known from years of studying the effects of other approaches.

“The hypothesis they have put forward is sound, and absolutely worth studying,” said Sally J. Rogers, a professor of psychiatry at the MIND Institute of the University of California, Davis.

“If you think about these animated characters, they’re strong visual stimuli; the emotions of the characters are exaggerated, those eyebrows and the big eyes, the music accompanying the expressions. Watching those characters is the way many of us learned scripts that are appropriate in social situations.”

But Dr. Rogers cautioned that using animated characters is hardly the key to reaching all autistic children. Many are fascinated by objects or topics without inherent social content — maps, for instance. But for those who fixate on movies, television shows or animated characters, affinity therapy makes sense, she said.

The researchers brought together by Mr. Suskind have written a proposal for a study of the approach. It calls for a 16-week trial for 68 children with autism, ages 4 to 6. Half the children would receive affinity therapy, using the shows or movies they love as a framework to enhance social interaction, building crucial abilities like making eye contact and joint play.

The other half, the control group, would engage in the same amount of interaction with a therapist but in free play, led by the child’s interest. Therapists have had some success using the latter approach, most notably in a therapy called Floortime, developed by Dr. Stanley Greenspan.

In autism therapy, progress is measured in increments and tends to be slow, especially in severely affected children, experts say. But the disorder — the autism spectrum, as it’s known — includes a very diverse group of children whose prospects for improvement are unpredictable and individual. Some children develop social skills relatively quickly, while others are stubbornly unreachable.

Dr. Pelphrey said that the affinity approach would incorporate many elements of pivotal response treatment, a type of therapy being intensely studied. It incorporates a system of rewards into normal interactions between a therapist (or parent) and the child, playing together.

Sarah Calzone of Stratford, Conn., said her son, now 7 years old, became more socially adept in a pivotal response trial at Yale. “The way it works is that, for instance, one time the therapist was playing with my son, blowing bubbles,” Ms. Calzone said. “Then the therapist stopped and looked away. Of course my son still wanted to see the bubbles, so he had to stop, too, and look in the same direction, then make eye contact and ask to continue.”

Those two responses, making eye contact and so-called perspective taking, recognizing another person’s point of view, developed quickly in the therapy. Her son, who has engaged in various therapies nearly every day for most of his life, is now in regular classes at school.

Dr. Pelphrey said that affinity therapy would deploy some of the same techniques, with the therapist playacting a favorite character and inhabiting the scenes with the child.

“Instead of watching Thomas the Tank Engine as a reward, for instance, we would have the child enter the social setting, with Thomas and Percy and the other characters,” and learn through them about eye contact, joint play and friendship, he said. The scientists plan to submit their study proposal to the National Institute of Mental Health for funding.

“The whole thing has been exciting, and a little weird,” said Mr. Suskind, now a senior fellow at Harvard, “having these leading neuroscientists listen to me and say, ‘O.K., what can we do to help?’ ”
at 6:54 AM