What’s Your Learning Disposition? How to Foster Students’ Mindsets

Stanford psychologist Carol Dweck’s work on growth mindsets has dominated much of the attention around how students can influence their own learning. But there are other ways to help students tap into their own motivation, too. Here are a few other important mindsets to consider.

Belief in the likelihood of success: Students’ belief in their own self-efficacy is a better predictor of academic success than measured ability. Students need to feel that they’re likely to succeed in order to sustain the hard work of learning something challenging. When students believe they’ll fail, they often don’t invest in the work or devalue the task.

The work has meaning and value: The brain naturally looks for connections. When students find academic work to be relevant to lives, interests, and concerns they’re much more likely to work on a task in a sustained way and to perform well. It takes much more energy to focus attention on a task that does not have direct value to the student.

Belief that abilities and intelligence can grow with effort: Known as a growth mindset, Carol Dweck’s theory we refer to above) if students believe the brain is a muscle that must be exercised, they’re more likely to interpret setbacks as opportunities to learn and improve. This mindset is associated with the joy of mastering a task, rather than learning for a grade or to outperform others. 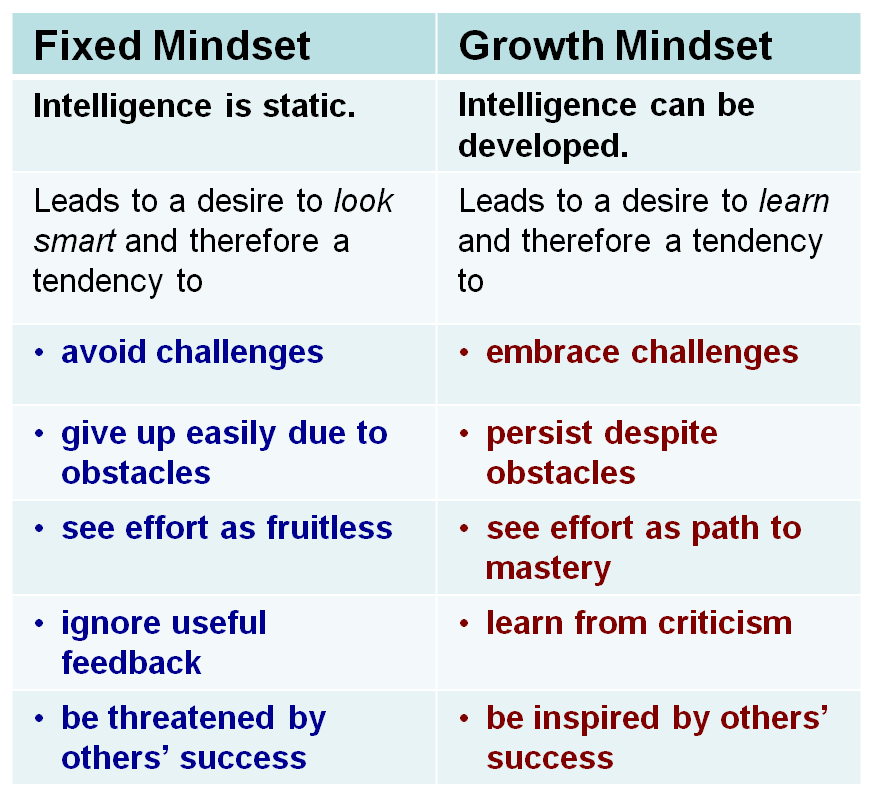 Schools can encourage students to develop these mindsets, but it requires an intentional focus. “One thing we like to do as a school is celebrate kids taking risks and failing and then learning from those failures,” said Stephen Mahoney, principal of Springfield Renaissance School on a Deeper Learning MOOC panel. The majority of Renaissance students receive free and reduced price lunch and 80 percent are students of color. Even the school’s honor roll is based on effort and perseverance rather than on objective performance. Setting school values in this way sends a strong message to students about what educators see as the most valuable skills school can teach.

To help students see learning as a process, their assessments need to reflect the same ethos, including lots of informal feedback so students can improve on their work. “If they did something not very well, and they only get one chance to show what they know, that’s not a very good way to foster a growth mindset,” said Camille Farrington, research associate at University of Chicago Consortium on Chicago School Research and author of a white paper on academic mindsets for the Hewlett Foundation.

To avoid that trap, schools can structure failure into the school culture, as Springfield Renaissance has done, so students don’t see a misstep as the end of their ability to succeed. “When students start reading the tea leaves and realize it’s impossible for them to succeed, they give up,” Farrington said. In points-based grading systems, students know when they’ve reached a point at which they can no longer pass, and stop trying.

“Students always have mindsets and they’re always in the process of affirming the mindsets they already have,” Farrington said. “If they believe that they don’t belong or they can’t really do it then they’ll be looking for confirmation that that’s true.” It’s the teacher’s job to interrupt that negative mindset and turn it around to something positive and adaptive. Researchers have seen the impact of small, experimental interventions on a limited scale, so teachers who see kids every day can have a much bigger effect.

To make assessment feel worthwhile to students, and progressive in nature, educators can allow students to show their learning in multiple ways and at multiple stages in the learning process. Allowing students to assess themselves as part of the process creates a thoughtful, recurring time for them to look at their own growth and set new goals.

It also helps to give very specific feedback using behavior language. There’s a big difference between, “good job, you got the right answer,” and feedback that points out specific qualities in the work that were well done and how that connects to one of the academic mindsets being fostered or to the student’s stated learning goals.

Influencing how students view themselves as learners is challenging work. Students often won’t respond if a teacher just tells them how they should think — that creates defensiveness. Instead, a good tactic is to teach them some of the neuroscience around learning, including that the brain is malleable.

“You’re telling students that when you work on really challenging things that’s when your brain is growing the most,” said Carissa Romero, assistant director of Stanford’s PERTS center, which studies academic motivation. Giving them a reason to care about their approach to learning helps them connect it to their own lives.
“Adults in the building have to be very clear that you can’t have a focus on academic mindsets if all you’re going to be focused on is grades.”

Another tactic is to ask students if they exhibited one of the academic mindsets in another area of their lives and help them see how it could apply to learning. When a student exhibits that mindset in school, it can then be identified and connected to the rest of their lives. It’s important in these conversations to honor who students are as people and where they come from.

Even in environments where test results dominate the conversation, teachers have control over the language they use. “Even if you’re forced to give lots of assessments, the way that you talk about your assessments can promote a growth mindset,” Romero said. “Tell [students] this will help you know where you are, and we can use this together to get you to where you want to be, and help you reach your learning goals.”

The Teacher is Central

“I think the best way to cultivate these academic mindsets is through the type of culture where every adult in the school is on the same page about what we’re trying to do and how we’re going about it,” said Ed Briceno, CEO of MindSet Works, a company offering professional development and curriculum based on Carol Dweck’s research. “And then everything we do on a daily basis fosters those positive academic mindsets.”

Creating that kind of culture starts by being honest with students about the kinds of goals educators are working towards and the challenges they faced along the way. “My kids know that I got kicked out of the Peace Corps and that I recovered from getting kicked out the Peace Corps,” said Mahoney. They also know his goal is to better support middle school math. He’s invited students to check in with him about that goal, and they do. By being transparent with students, Mahoney is modeling the kind of approach that he’d like to see students take.

“It starts with the conversation you direct in schools and it starts with the examples you set for kids,” Mahoney said. “The kids are watching and they’re making note of that. And it’s important to make this fun. Making it feel like a game for kids is just another way of making it not so bad to fail.”

Growth, community, a sense of personal agency, and creating meaningful work are not always the primary goals in many U.S. schools. Too often the conversation is focused on test scores, standards and pacing guides. Educators and researchers working to develop academic mindsets emphasized the importance of school culture to make kids believe in the concepts. “Adults in the building have to be very clear that you can’t have a focus on academic mindsets if all you’re going to be focused on is grades,” said Mahoney.

Fostering academic mindsets is a two-way street and requires teachers to listen to students. “If we’re thinking about what’s required of us as teachers to foster academic mindsets in classrooms — and thereby foster student development and growth — it’s a mindset in and of itself,” said Rob Riordan, co-founder of High Tech High and President of its Graduate School of Education. “It wants to know what students are thinking and how they’re thinking.”
at 5:04 AM