Commencement Address to the Preschool Class of 2014

The Excelsior Preschool for the Gifted and Talented 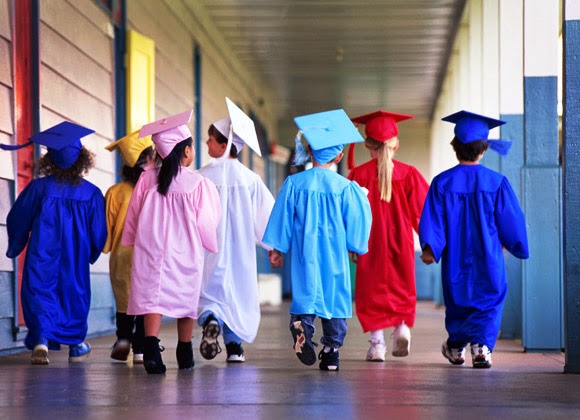 Friends, family, and members of the graduating class of the Excelsior Preschool for the Gifted and Talented,

I’m honored to be your commencement speaker today. Your teacher wanted me to read excerpts from “Oh, The Places You’ll Go!” But I’m not going to do that—you’re not babies anymore. If you’re sitting here today, it’s because your mountains aren’t waiting for you—you’ve already been moving them.

As a fellow Excelsior alum, I see a preschool class that is uniquely equipped to solve the problems our world faces. I read some of your admissions essays to get a clearer sense of who you are, and wow. It’s inspiring to see how many of you aren’t afraid to defy convention. The number of you who drew abstract representations of yourselves instead of submitting a boring personal statement—that’s the kind of out-of-the-box thinking that makes you exceptional.

You have all worked incredibly hard to get here. Just think: before preschool, you were still picking your nose—now you’re carrying spare tissues. A lot of you are feeling anxious about your future. Will the curriculum in kindergarten be rigorous enough to prepare me for the LSAT? Will I connect with the right influencers?

I. Find your passion.

Kindergarten is very different from where you are right now. No more mud castles or aimless hangouts in the sandbox. Get ready to work long hours, because naptime is a precious luxury where you’re headed. Preschool was your intellectual playground to explore your interests and, hell, to experiment. William Butler Yeats explained the transition from preschool best when he said, “Education is not the filling of a pail.” In kindergarten, you should be homing in on your passion.

Some of you are already showing great potential. I hope I don’t embarrass anyone by naming names, but Jayden, what you’re doing with building blocks is incredible. Forget developing Candy Crush Saga—we’re talking Candy Crush EMPIRE. Shiloh, the way you stare off into space makes me think that you could write the next great American e-book. South, your finger painting makes me believe in love. You are already on your way to running your own Bushwick loft gallery/communal living space.

II. The road to success is paved with obstacles.

You’re inheriting a set of challenges that no other generation has faced. Let’s be honest: you do a lot of talking, but you don’t communicate effectively. Your personal brands are a disaster. You’re at a disadvantage because your parents haven’t just chronicled every move you’ve made since birth—they’ve broadcast it to the whole world. I’ve seen videos of several of you “shutting down the crib” to the Black Eyed Peas.

One glance at Instagram tells me that you can’t relate to your peers, because you think a bulldog is your best friend. Each and every one of you has leaked nude photos. You’ve been letting your parents shape and manage your personal brand, without even giving consent. It’s time to own your image.

Many of you have been taught that gratitude is saying “please” and “thank you.” Get out of that early two-thousands mentality. If you want your parents to know how grateful you are, learn how to code. It’s time to harness the skills you’ve gained from swiping on your mom’s iPhone and sending all of those cryptic e-mails to her co-workers. I’m not going to sugarcoat reality: the competition out there is fierce. For every time you sat on Dad’s iPad and almost broke the screen, other preschoolers were out there building touch screens that don’t even crack. Figure out coding, and you’ll be able to pay your own way through college or, best-case scenario, you won’t even need to attend.

Think big picture: you’ll run your house by the time you’re thirteen, and your parents won’t be able to say no when you’re invited to Calliope’s boy-girl sleepover.

Look at the person sitting to your left. Now, to your right. These aren’t just your peers—they’re also your greatest advocates. The only way to succeed is to support each other’s dreams and ambitions. Most important, don’t be afraid to ask each other for help. You can start living that advice today by picking up my new book, “The Rest of Your Life Started Yesterday: Living a Balanced Life From Preschool to Premed.”

It covers a lot of the topics I touched on today and so much more, from CSS drills to recipes for gluten-free after-school snacks. We Excelsior alums have to stick together, so I’m throwing in a special discount code for the first ten people who download the book on Kindle. Congratulations and good luck, Preschool Class of 2014!

From The New Yorker's "Shouts & Murmurs"