From the HuffPost Blog "Healthy Living"

Concussion rates among U.S. high school athletes more than doubled from 2005 to 2012, according to a new study. 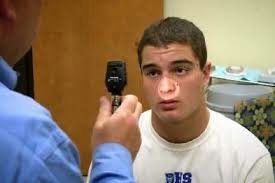 But the increase isn't necessarily due to high school sports growing more dangerous, according to lead author Joseph Rosenthal, clinical assistant professor of physical medicine and rehabilitation at Ohio State University. "It's scary to consider these numbers because at first glance it looks like sports are getting more dangerous and athletes are getting injured more often," he said in a statement.

"This study is observational so it doesn't offer any proof about why the rates are going up. But I think in reality it's showing that concussions that were occurring before are now being diagnosed more consistently –- which is important."

Using data from the High School Reporting Information Online, Rosenthal and his colleagues analyzed a sample from 100 American high schools with at least one certified athletic trainer. Between 2005 and 2012, 4,024 concussions were logged in young athletes playing football, soccer, volleyball, basketball, wrestling, baseball and softball.

Starting in the mid-2000s, both the national media and legislators in many states began to pay more attention to concussions in both professional and younger athletes. This heightened awareness of the symptoms and risks of concussions may have led officials to ignore fewer concussions, Reuters Health reported.

"A lot of injured athletes don't want to come out of games or stop practicing because they don't want to lose their position," Rosenthal said. "But they can have symptoms that can last for an extended time period that can affect day-to-day life, school and personal relationships -– they can experience irritability, pain, difficulty concentrating and sleep problems."

"Furthermore," he added, "if they continue to play while symptomatic, they are at risk for a second impact that can lead to severe disability and death. If you have symptoms, you've got to rest your brain and prevent further injury in order to recover."
at 6:47 AM