The Centers for Disease Control and Prevention recommends that children and teens get 10 hours of sleep per night. If your child is not getting at least that much sleep, consider less TV time.

According to an article in the Harvard Gazette, a study of “more than 1,800 children from ages 6 months to nearly 8 years old found a small but consistent association between increased television viewing and shorter sleep duration.”

The research was a long-term study that analyzed annual parent-reported data from the time the children were 6 months old through age 7. The factors looked at were the daily amount of time children watched TV, whether they slept in a room with a TV, and the average amount of sleep they got. 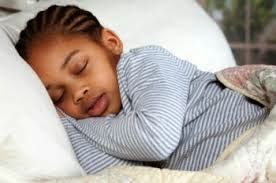 Consistent with other short-term studies, this research team from Mass. General Hospital and Harvard School of Public Health found that more TV was associated with less sleep:
Racial and ethnic minority children were much more likely to sleep in a room where a television was present, and among those children, the presence of a bedroom television reduced average sleep by around 30 minutes a night.

In addition to monitoring TV time, the National Institutes of Health provides these strategies to ensure that your child gets enough sleep: