Why Children Can't See What's Right in Front of Them

Scientists say there is an explanation for (most) children ignoring their parents when they're busy.

It is an experience as familiar as it is frustrating to many parents and teachers - getting children to pay attention to simple instructions while they are engrossed in watching television, playing a game or reading a book.

Such is their ability to ignore what is happening outside their immediate focus that even talking through a megaphone would have little effect on their responsiveness.

But scientists believe there is actually a reason for their lack of awareness, which is linked to how the brain develops.

"A child trying to zip up their coat while crossing the road may not be able to notice oncoming traffic, whereas a developed adult mind would have no problem.”
--Professor Nilli Lavie, University College London 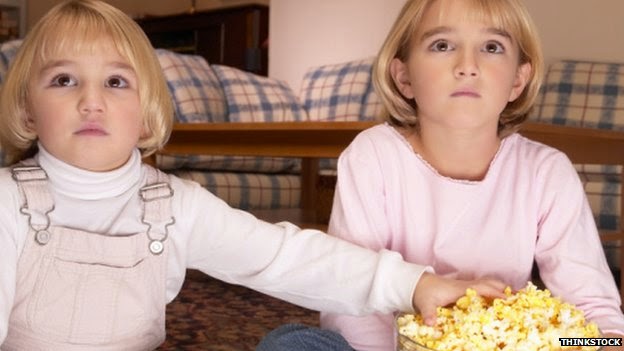 They say children are not intentionally ignoring us; in fact, they are experiencing inattentional blindness.

This blindness is the difference between looking and seeing what is actually there, between hearing and registering what is really said. The result is a lack of awareness, especially outside the immediate focus of attention.

According to Professor Nilli Lavie, from University College London's Institute of Cognitive Neuroscience, children have much less peripheral awareness than adults.

"Parents and carers should know that even focusing on something simple will make children less aware of their surroundings, compared to adults.

"For example, a child trying to zip up their coat while crossing the road may not be able to notice oncoming traffic, whereas a developed adult mind would have no problem with this.

"The capacity for awareness outside the focus of attention develops with age, so younger children are at higher risk of inattentional blindness."

Prof Lavie's views are based on an experiment she carried out recently to test levels of inattentional blindness in children and adults. She asked more than 200 visitors to the Science Museum, in London, to judge which line on a screen was the longest in seven different examples.

On one screen a black square flashed up and participants were asked whether they noticed it or not.

While 90% of the adults were able to spot the black square most of the time, children performed far worse, with fewer than 10% of seven to 10-year-olds spotting the square.

Eleven to 14-year-olds also showed lower awareness and that awareness decreased as the difficulty of the task increased.

This was a finding that surprised Professor Lavie.

She says: "In children, the primary visual cortex wasn't responding to the object on the screen and this appears to develop with age, until 14 and beyond. But I didn't expect the older children would also suffer from inattentional blindness. It would be interesting to see at what point they fully develop."

Previous research in adult brains suggests that the primary visual cortex is the part of the brain responsible for perceiving things, because if this area is damaged then people tend to experience less peripheral awareness.

There are obvious safety implications to this delayed development. Something as simple as texting while crossing the road becomes much more dangerous if awareness is impaired, for example.

But there are upsides to inattentional blindness too.

Who wants to be distracted by anything and everything around us? Surely a lack of peripheral awareness means we can retain our focus and concentrate.

Psychologists argue that we all have a limited capacity for attention, to some degree, and when carrying out very demanding tasks, it's a trait that is necessary.

Richard Wiseman, professor of psychology at the University of Hertfordshire, has studied human visual processing in great detail and describes it as "enormously complicated".

"Big parts of the brain are dedicated to it. It's very difficult, so we don't want to be processing stuff that's not important.

"That's why you need inattentional blindness, otherwise you'd not be able to focus - and that's not a good way of getting through the world."

Because the brain gives us the illusion it is constantly monitoring everything, he says, we are surprised when we don't notice something obvious.

Professor Wiseman has used and refashioned the now famous selective attention test, first created by Daniel Simons, to demonstrate how easy it is to miss the presence of a gorilla in a video.

While watching the video, people are asked to concentrate on something else, in this instance on the number of times a ball is passed between people playing basketball.

"As adults we are constantly learning what is not important, so maybe we are more likely to get tripped up."
--Professor Richard Wiseman, University of Hertfordshire

In another test, he asks people to concentrate on a card trick. During the trick, certain background items change colour, but few people notice because they are focused on the cards.

Prof Wiseman says creative people are likely to be better at spotting things than others, whereas individuals who feel anxious or worried about the task are less likely to notice the gorilla in the room.

He says there are many occasions in life when we miss the blindingly obvious just because we are totally focused on another problem. Car drivers have said they didn't see the pedestrian because they were looking out for other hazards, for example, and airline pilots have missed warning lights in the cockpit because they were busy dealing with other issues.

"As an adult we are constantly learning what is not important, so maybe we are more likely to get tripped up," Prof Wiseman surmises.

When it comes to inattentional blindness, we are all prone to it, we all complain about it and yet it is essential to everyday life.

Just don't expect your children to be happy when your focus on the television renders them invisible.
at 7:01 AM