From the Blog "Not Running A Hospital"

For over 25 years, I have been coaching girls soccer--this year 12-year-olds--and part of my routine has been to teach the children how to head balls. Stefan Fatsis explains the proper technique:

As a teenager in the 1970s, I watched Pele, when he played for the star-studded New York Cosmos, explain how to head a ball. First he pointed to his forehead. Then he placed the thumb and forefinger of each hand in front of each eye and opened them both wide. Then he dragged his thumb and index finger across his closed mouth. Moving his head and shoulders back in tandem to prepare to strike the ball, Pele demonstrated how the neck muscles needed to be tensed at the moment of impact.

But, as is often the case, the proper technique is not employed with the following result:

Failure to take Pele’s steps can result not only in a misdirected ball but in greater force imparted to the brain. That’s because a header is a collision that can cause the brain to shake inside the skull.

“If you take a header off the back of your head or the side of your head and it whips your head around, there are much greater forces, 40 or 50 G’s, as opposed to a proper header where the G-force is under 20,” Dr. Robert Cantu, a colleague of McKee’s and the co-author, with Mark Hyman, of the 2012 book Concussions and Our Kids, told me recently.

Most prepubescent children aren’t capable of making the necessary preparations to head the ball; they’re just not strong enough or aware enough or coordinated enough.

And, if they do keep their eyes open and their mouths shut and strike the ball with their foreheads, their neck muscles, even if tensed, aren’t strong enough to prevent their heads from absorbing what often are elevated G-forces.

So, I read with interest a Washington Post story about a decision from a Pennsylvania school:

The Shipley School in Bryn Mawr, Pa., instituted a “no-heading” policy for its middle school soccer teams earlier this month. The groundbreaking stance prohibits heading with game-sized balls in practice and asks players to avoid heading the ball in games.

I've decided this is the right thing to do. Just as we apply the precautionary principle in environmental matters, we should apply it here. Why take the chance of causing harm when it is not necessary? 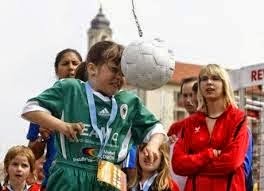 Indeed, I could argue that it is more valuable for children of this age to learn how to use other parts of their body when trying to control an air ball. The game can be just as exciting and interesting if kids learn how to use their chest, their thigh, or other body parts in this situation.

Accordingly, I've decided to adopt this approach for the future: I plan to encourage my young charges to avoid using their head for air balls. As you can see below, I think they will still bring enough intensity to the game to make it very competitive!

Paul F. Levy is the former President and CEO of Beth Israel Deaconess Medical Center (BIDMC) in Boston and a resident of Newton, Massachusetts.
at 6:47 AM