Give Kids Your Undivided Attention — or No Attention At All

Here is what I wish I’d known, from 14-some years into this parenting gig: Leave the children alone when you must and then really be with them when you can. Or, to put it slightly differently: Alternate fully engaging with fully ignoring them. There is, of course, an implied “instead of” here — instead of half paying attention to them all the time (cough smartphone cough).

I work at home, so the all-or-nothing approach means I have to pick a time to stop working; I have to communicate this time to the children; and then, when the time comes, I have to close the lid of my laptop and leave it behind. At which point I am free to untangle somebody’s knitting, look at Roz Chast cartoons together, or play Settlers of Catan.

The children, when they can rest assured of my full attention at this later time, thrive in its absence.

On a snow day this past winter, my 14-year-old spent six hours punching teeny holes in a long, long strip of paper so that, when he cranked through a little music box, it played “Falling Slowly” from Once. I’d walk past the living room for another cup of coffee, and he would be picking notes out at the piano, studying sheet music, or punching his little holes. 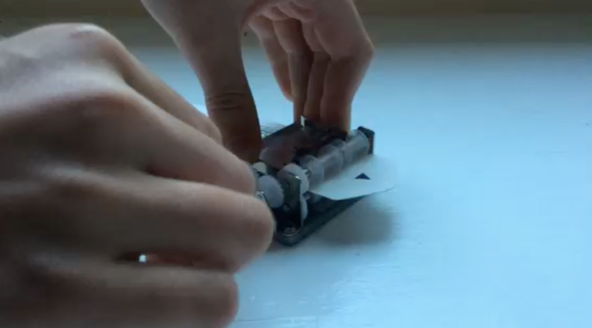 It’s not that he’s so brilliant; it’s that he has become self-entertaining. His sister spent this same chunk of time teaching herself Chinese characters from a book and taking pictures of the cat cutely sneezing. Again, not prodigy territory, but good.

Back when life was the nonstop daily mayhem of diapers and string cheese and short people crying for no reason, I used this same approach, but in more of a de facto, by-accident kind of way. For example, I often napped on the couch while the children rattled around happily, doing their chunky puzzles and eating Cheerios from the carpet and wheeling each other around on the rainbow xylophone.

Was this slacker parenting? Maybe, and I was ashamed, because it wasn’t a deliberate philosophy back then — I was just tired. But I alternated negligent loafing with full attentiveness: searching for Goldbug amid the bulldozers, bundled-up winter walks or lying quietly beside a person whose eyelids fluttered for hours before snapping open to admire, again, the peachy moonshine.

The upshot was a diminished expectation that parents should properly hover around gushing compliments while your Playmobil guys breastfeed all the zoo animals. The upshot was real time to myself, and then real time with the children.

This means eliminating that vast middle ground of half paying attention to them all the time — e.g., checking your email for just long enough that they finally wander off and get involved in the construction of a Lego jewel-loading dock, and then interrupting them, guiltily, (“Wow! So are those things at the jewel-loading dock jewels?”) for just long enough that they lose the thread of whatever it is they were doing, before you return to your compulsive email checking.

Because maybe you’re being notified about a MacArthur “genius” grant (for using almost all the vegetables from your C.S.A.?) even though it’s just an email from your child’s teacher, reminding you that it’s your week for classroom rag duty.

When I don’t do the all-or-nothing cleanly — when I leave the computer open on the couch in the living room, for example — email is like an alluring other person in the room, pinging out slobbering little Pavlovian messages to me. I will be driven to such distraction that one of my marbles will be blocked permanently from exiting its triangle, and my children will sigh and, almost reluctantly, beat me at Chinese checkers.

Shut your phone down, leave your laptop in its bag and remember that your life is only each individual moment, of the highest possible quality, all of them strung together.

Our undivided attention may be the very most valuable asset we offer our children.

Or get the gadgets out and get to work — because the complete absence of attention might just be the second.

Catherine Newman, the author of Waiting for Birdy, writes at www.benandbirdy.blogspot.com.
at 7:22 AM