From the South Brunswick Patch 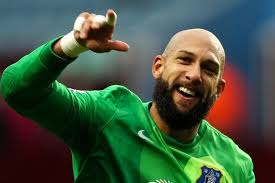 Tim Howard was a 1997 graduate of North Brunswick High School whose world-class goalie's skills pushed the U.S.A toward some of its greatest successes in World Cup history this year.

On Tuesday, Howard, otherwise known as "Superman," made 16 saves — more than any World Cup goalie since 1966 — in the United States's 2-1 nail-biting, extra-time loss to Belgium, eliminating Howard's American overachievers from the cup.

But Howard has had to do a lot more than swatting away 60-mph soccer balls, 16 times in a game, to become a star.

Howard was diagnosed with Tourette's Syndrome – a neurological disorder – while in the sixth grade. Only Howard refused to let Tourette Syndrome deny him his dream of becoming a star athlete.

At just 15, Howard already was a member of U.S. youth national soccer teams, and by 18, he was playing professional soccer with the North Jersey Imperials of the United Systems of Independent Soccer Leagues.

"I am honored to join the Board of Directors of the New Jersey Center for Tourette's Syndrome and Associated Disorders, which has done so much to provide advocacy and support for families,” Howard said last year.

After graduating from North Brunswick, Howard went on to have an all-star career as a member of Major League Soccer’s New York/New Jersey MetroStars from 1998-2003; the English Premier League’s Manchester United from 2003-2005; and Everton, from 2006-present, as well as the U.S. men’s national team (2000-present).

While with the MetroStars in 2001, Howard was named the MLS Humanitarian of the Year for his advocacy efforts on behalf of the New Jersey TS community.

Now, Howard has said, he is excited to continue the work he started more than a decade ago with NJCTS.

“NJCTS has changed the course of TS research through the TS Cell and DNA Sharing Repository at Rutgers University and has developed a worldwide reach. I look forward to working with Faith Rice and the other leadership to establish resources for children and families living with this often devastating neurological disorder," Howard said.

Added Rice: “We are delighted to welcome Tim Howard, who has been such an instrumental part of our advocacy and awareness efforts over the years, onto our leadership team. Tim deeply cares for the 1 in 100 kids affected by TS, and with his local, national and international impact, the New Jersey Center for Tourette's Syndrome will continue to move rapidly toward creating a future unencumbered by TS for generations to come.”

Howard's American squad made it out of the so-called "Group of Death" last week after losing to Germany 1-0, the first time the U.S.A. has advanced in consecutive World Cups.

More information about Tourette's Syndrome, Tim Howard’s contributions to NJCTS and the organization itself is available by calling 908-575-7350 or by visiting www.njcts.org.