Why Self-Esteem Hurts Learning but Self-Confidence Does the Opposite

From Open Colleges Australia
via InformED

It’s all about confidence, they say. Success in any form, be it vocational or interpersonal or what have you, all boils down to self-belief (or at least the appearance of it). But what about more quantifiable forms of success, like academic performance? You either ace the test or you don’t, but did confidence–or lack thereof–play a part in getting you there?

In fact, as you’ll see in a moment, when we tell our students to “believe in themselves,” we may actually be doing them more harm than good.

Roy F. Baumeister, professor of psychology at Case Western Reserve University in Cleveland, Ohio, has been studying self-esteem for decades, and has published more research on the topic than any other specialist in the U.S.

In his essay, “Should Schools Try to Boost Self Esteem?” he warns us not to conflate self-esteem with confidence.

“Self-esteem is, literally, how favorably a person regards him or herself,” Baumeister writes. “High self-esteem can mean confident and secure–but it can also mean conceited, arrogant, narcissistic, and egotistical.” 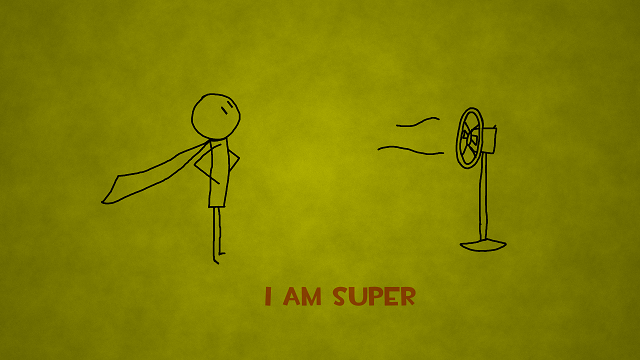 What’s more, there’s little to no correlation between self-esteem and academic performance, and Baumeister’s not the first to discover this.

“There is no getting around the fact that most educators who speak earnestly about the need to boost students’ self-esteem are unfamiliar with the research that has been conducted on this question,” says educator and psychologist Alfie Kohn. “At best, they may vaguely assert, as I confess I used to do, that ‘studies’ suggest self-esteem is terribly important.”

The relationship between self-esteem and student outcomes is limited, at best. In a careful review of 128 studies on this topic, two Australian researchers, B. C. Hansford and J. A. Hattie, found that the average correlation was in the range of .21 to .26, which means that differences in self-esteem can account for only about 4 to 7 per cent of variation in academic performance.

“The effects of self-esteem are small, limited, and not all good,” Baumeister says.

And that’s to say nothing about the idea of boosting self-esteem in order to improve student performance.

“To encourage the lower-performing students to regard their performance just as favorably as the top learners–a strategy all too popular with the self-esteem movement–is a tragic mistake,” Baumeister warns. “If successful, it results only in inflated self-esteem, a recipe for a host of problems and destructive patterns.”

Boosting confidence, on the other hand, can make all the difference.

In a representative University of Iowa study, college students were divided into high confidence and low confidence groups by being told that they were taking a test designed to measure intelligence of Ivy League versus high school students. Test scores for the groups were compared, and peer evaluations of participants’ performance and academic confidence were examined. The researchers expected group assignment to affect participants’ academic confidence and academic performance, and they were right.

In another study, researchers examined first year engineering students’ learning of mathematics in a university college during 2005–2007. The aim was to better understand students’ confidence and determined whether it affected performance. Surveys were administered, with questions asking about previous mathematics qualifications, student confidence, attitude, liking of the subject, and motivation. The responses were analyzed and compared with marks achieved by the students on their first year engineering mathematics examinations. Student confidence influenced performance by as much as 12 per cent.

When it comes to academic performance, confidence is a much stronger predictor of success than self-esteem. But when we talk about boosting students’ confidence, we may be focusing on the wrong thing. While general confidence refers to a person’s character or personality, academic confidence more closely resembles a perceived ability to accomplish a set of tasks.

Kansas State University professor Candice Shoemaker looks at the psychological constructs of “confidence” and “self-efficacy” (a fancy term for academic confidence, in this case) to evaluate the effectiveness of targeted learning objectives on student achievement.

“Confidence is a measure of one’s belief in one’s own abilities and is considered a psychological trait that is related to, but distinct from, both personality and ability traits,” she says.

“An interrelated construct is ‘self-efficacy,’ which refers to a person’s belief in one’s capabilities to learn or perform behaviors. Research shows that self-efficacy influences academic motivation, learning, and achievement. “

Although confidence and self-efficacy are interrelated, she says, a defining aspect of self-efficacy, which distinguishes it from the more general construct of confidence, is its domain-specific nature.

In one of Shoemaker’s recent studies, self-assessments were given to students enrolled in the course in the fall semesters from 2005 to 2008 to assess whether the learning objectives were being met. The 50-item assessment asked students to record their confidence in ability to do something such as “distinguish between transpiration and respiration” or “write a scientific plant name.” Students were asked to indicate how confident they were on that day,from “not confident at all” to “very confident.”

But Shoemaker says measuring confidence within a specific domain turns it into something else.

“It is more likely that self-efficacy, rather than confidence, was impacted as students moved through the course,” she says, “because all the activities associated with a course means a course is a domain-specific construct, and the students’ reported confidence at the end of the semester was correlated with academic performance.”

Vrugt et al. (1997) saw a difference between confidence and self-efficacy too. While they defined self-efficacy as pertaining to specific activities, making it more of an interaction between a person and a task, they considered self-confidence to be a personal characteristic.

“Since confidence generally has been regarded as a personality trait, academic self-confidence can be viewed as a separate and more specific term, which can be referred to in educational settings as a predictor of academic performance.”

Tuckman and Sexton (1992) suggest that students with higher self-efficacy are better at searching for new solutions and are more persistent at working on difficult tasks, whereas people with low self-efficacy give up more easily when dealing with difficult tasks and cannot concentrate on tasks as well.

These patterns of behavior, if they continue, lead to the development of different levels of actual ability, which results in varying levels of achievement. 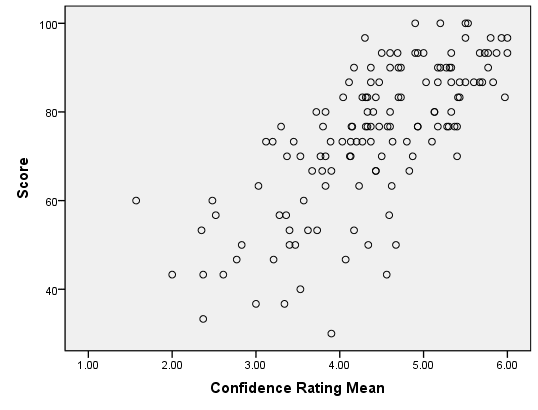 The Benefits of Studying Confidence

At the National Institute of Education in Singapore, professors Lazar Stankov, Suzanne Morony, and Lee Yim Ping have found that students who think they are skilled in math tend to perform well on math tests.

Lazar and his team point out that there is plenty of evidence indicating the effects of self-concept, anxiety, and self-efficacy on student achievement, but fewer studies investigate the role of confidence.

Collecting data from more than 600 Secondary 3 students in 5 schools, the researchers found confidence to be highly predictive.

“From this study, we know that confidence is a much better predictor of students’ achievements than any other non-cognitive measure,” notes Lazar. “In fact, it acts in a way that it overcomes everything else; so confidence is very important.”

The team measured students’ self-confidence by asking them to complete a math test and, after each item on the test, asking how confident they were that their answer was correct. They then calculated the students’ confidence rating (or “bias score”) by comparing this measure to the actual percentage of correct answers.

[Read more about how to practice effectively.]

This could encourage self-reflection in students and motivate them to pay more attention to these weaker topics. “It teaches students to really think about what type of math questions they struggle with and which questions they thought were easy,” says Morony.

“When we went to share the findings with schools,” Yim Ping adds, “teachers were very interested to know their students’ bias scores. They wanted to know how correct their students’ answers were and how confident the students were about their responses being correct.”

Some of the findings enabled to the teachers to sharpen their selection of specific strategies to increase their students’ confidence. “They realized they could leverage on certain topics to explore enhancing students’ self-confidence and interest,” she adds.

Similar findings are documented in a 2012 study called “Confidence: A better predictor of academic achievement than self-efficacy, self-concept and anxiety?” Researchers assessed confidence together with scales measuring self-efficacy, different kinds of self-concepts, and anxiety among the 15-year old students from Singapore. A distinct confidence factor was identified in both mathematics and English.

“Confidence as studied in our work to date has been the best predictor of achievement in both mathematics and English,” the authors write.

Can You Train Yourself to Be a More Confident Learner?

Some studies suggest that confidence levels can be manipulated or situationally-induced.

For example, Haywood (1992) described a case study in which a thirteen-year-old boy’s scores on the Wechsler Intelligence Scale for Children rose 28 points in four months as a result of a significant change in motivational circumstances, which increased his self-confidence and engagement in mental work. The boy was exposed to a few hours of dynamic assessment, a program in which he was not allowed to fail, and was given any help needed to succeed.

The majority of participants were overconfident in their ability to use a product before trying it out, but grossly under-confident after one attempt.

As a result, his enthusiasm for and confidence in his mental abilities rose dramatically. So it may in fact be possible for students to improve their academic confidence in ways other than simply studying harder.

Another study highlights some of the confidence-related limits we impose on ourselves when it comes to learning. BYU professor Darron Billeter had subjects test a range of new products, from a high-tech fishing pole to a computer program. The majority of participants were overconfident in their ability to use a product before trying it out, but grossly under-confident after one attempt.

Billeter says this illustrates our tendency to give up at the first sign of ineptitude.

What happens in the brain is that first-time tasks are solved using controlled processes, which are slow and flexible. But over time, the task becomes automated and is delegated to the back of the brain.

“The reason people underpredict their own rate of learning is they don’t appreciate how quickly these controlled processes are going to become automated. My advice to individuals is to stick with it. You’re going to get better at the task faster than you expect, almost always.”

The same can be said for students.

Saga has taught and tutored writing at the elementary, secondary, and post-secondary levels. Her educational interests include psychology, creativity and system reform. She earned a B.A. in Creative Writing from Oberlin College, and lives in Portland, Oregon, USA. You can reach her on Google+, @sagamilena or saga.briggs @ oc.edu.au
at 6:51 AM