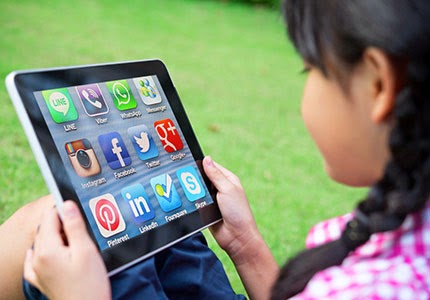 Social Media isn't going anywhere, so as parents we to need consider how it affects kids' developing minds and determine what role we want it to play in our children's lives.

Is your child disinterested in video games, television, and texting, but alarmingly enthralled by social media sites? Many children are: a recent Pew Research Center survey determined that 73 percent of 12- to 17-year-olds use Facebook, with smaller but significant percentages of kids who are active on Twitter, Instagram, and MySpace.

Why is social media so popular? Two primary reasons — for people of all ages — include a love of “sharing” (46 percent) and searching for “entertaining or funny” content (39 percent). Women also list “learning about ways to help others” (35 percent) and “receiving support from people in your network” (29 percent) as major excuses to log in.

These all sound like healthy reasons to use social media. Nothing to worry about, so… what are parents afraid of?

Being a Good Digital Parent: What You're Up Against

Social media, like other technology examined in this series, has the potential to provide enormous benefits or catastrophic damage to your child’s frame of mind. It's safe in proper doses that are cautiously monitored; but it can be harmful if obsessively used with wide-open access to age-inappropriate content.

Let’s examine the scientific research to see what should be on parents' list of things to guard against.

Social network sadness? Can a person’s obsession with Facebook lead to depression? Quite possibly, but opinions vary. A 2013 study of 190 college students ages 18 to 23 at University of Wisconsin concluded that they “did not find evidence supporting a relationship between SNS [social networking services] use and clinical depression. Counseling patients or parents regarding the risk of 'Facebook Depression' may be premature.”

Previously, however, Serbians disagreed. A 2012 University of Belgrade study of 160 high school students determined that “online social networking is related to depression,” — but that additional research would be needed to determine whether or not Facebook is triggering depression.

This finding was echoed by a 2013 University of Michigan study in which researchers report the more time participants spent on Facebook, “the more their life satisfaction levels declined over time." The study noted that this negative effect didn't happen from interacting with others in real life. On the surface, Facebook is an invaluable resource for fulfilling the basic human need for social connection. Rather than enhancing well-being, however, these findings suggest that Facebook may undermine it.

Am I too fat? An April, 2014 study of 881 college women who use Facebook regularly determined that “more time spent on Facebook was associated with more negative feelings and more comparisons to the bodies of friends.” Researcher Petya Eckler of the University of Strathclyde suggested that, “The attention to physical attributes may be even more dangerous on social media than on traditional media because participants in social media are people we know.”

An earlier study conducted by The Center for Eating Disorders at Sheppard Pratt in Baltimore reached the same conclusion, with these dismaying statistics: “32 percent of users feel sad when comparing Facebook photos of themselves to those of their friends… 37 percent feel they need to change specific parts of their body when comparing their photos to others’, and… 44 percent wish they had the same body or weight as a friend when looking at the photos.”

International cyberbullying: A 2014 South Korea survey of 4,531 youths ages 11 to 14 uncovered that 9.7 percent of the children were involved in cyberbullying — either as victims (3.3 percent), perpetrators (3.4 percent), or both (3.0 percent). These rates were much higher, however, in a 2009 Finnish study of 5,516 adolescents that found 10 percent of the boys had been victims, 10 percent had bullied, and 10 percent had witnessed cyberbullying. Among the girls, the figures were slightly higher: 11 percent, 9 percent, and 16 percent, respectively.

A 2012 poll conducted by The Global Research Company Ipsos showed even higher numbers: 12 percent of parents around the world reported that their child has been cyberbullied and 26 percent reported knowing a child in their community who has experienced cyberbullying. Of those, a majority (60 percent) said the harassment occurred on social networking sites like Facebook.

Risky behavior: A study published in May, 2014 in the Journal of Adolescent Health studied 1,563 tenth graders from five Southern California high schools to determine how much social media use affects adolescent risk behaviors like smoking, drinking, and doing drugs. The researchers’ conclusions were disturbing.

They warn: “Exposure to risky online content had a direct impact on adolescents' risk behaviors… friends' online behaviors should be considered a viable source of peer influence.”

If your A+ child is on Facebook 15 minutes a day to learn about ways to help others, then congrats, you’re blessed with great fortune! If your child spends an additional 10 minutes each day online to eradicate famine, pandemics, or chinchilla ranching, you remain a parent to envy.

Unfortunately, pernicious preoccupations on Facebook are a bit more common. Is your teenage son cackling at photos of his drunken friends vomiting at parties? Is your daughter starving herself so her next half-naked “selfie” can match her stick-figured friend’s? Are your tween twins suddenly losing sleep due to cyber victimization? If you don’t know the answers, it’s time to ask — and well overdue to establish serious SNS rules.

By limiting hours per day, monitoring content, and openly explaining how SNS habits can negatively impact their developing brains, you can be on your way to smart, and safe, digital parenting.

Parenting in the Age of Technology

Are there any simple rules for monitoring a child’s technology — whether it means video games, tablets, cell phones, TV or social media? Unfortunately, there's still so much we don't know about the long-term effects of technology on the brain. But since technology isn't going anywhere, parents need to think carefully about the role it plays in our children's lives.

"Every child is different, so it is difficult to draw hard-and-fast rules, but I think wise parents go for less tech use rather than more," concludes psychologist Jane Healy, author of Failure to Connect.

In the end, it’s vital to remember that your kids are watching you. The old adage “Do as I say, not as I do” just doesn’t work when it comes to technology. If your face is pasted to an electronic screen most of the time, your impressionable offspring will consider that normal — and do the same.

Shut off all gizmos regularly and enjoy face-to-face conversation. Take your children outside, without digital toys, and enjoy the wind, sunshine, trees, and flowers. Growing brains need the kind of nourishment that technology — no matter how sophisticated and bewitching — can never supply.