A new study suggests a way to help the parents of children with autism and other developmental disorders.

Parenting is hard work, but having a child with a severe disability takes an extra toll. Mothers of children with autism or other neurodevelopmental disorders report high levels of stress, depression, and anxiety. This, in turn, can negatively impact how they care for their vulnerable children.

Many studies have focused on therapies for the children, but the serious issue of parental stress has been largely overlooked—until now. A new study in the journal Pediatrics suggests that both mindfulness and positive psychology techniques can reduce mothers’ stress. 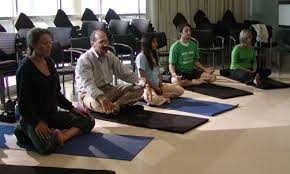 In their study, Elisabeth Dykens and her colleagues randomly assigned 243 mothers to a six-week group treatment program that employed either mindfulness techniques, like deep-belly breathing, or positive psychology exercises designed to foster virtues like gratitude and patience. Trained mentors who also had children with disabilities led the weekly hour-and-a-half sessions.

The mothers completed mental health assessments before, during, and up to six months after the study.

At the beginning of the study, 85 percent of the mothers reported significant stress levels. Many also suffered from mental illness—41 percent had anxiety disorders and 48 percent were clinically depressed. The researchers expected that certain mindfulness and positive psychology techniques would significantly improve their stress levels and mental health; similar interventions have been successful in other group treatment studies.

Participants from both groups practiced their techniques as homework and shared how these exercises worked for them with their respective groups.

Both treatments worked. They led to fewer feelings of anxiety and depression and fewer dysfunctional parent-child interactions. On average, mothers slept better and had greater life satisfaction during treatment.

Even better, the mothers either maintained these improvements or continued to improve six months after the group treatment sessions had ended.

But in this study, the mindfulness group showed more immediate improvement than did those in the positive psychology intervention, reporting less anxiety, depression, and insomnia.

The researchers suggest that the greater effects associated with mindfulness techniques may be due to “the immediacy of physiologic relaxation responses incurred in mindfulness practice, including strengthened attention to bodily sensations, and less reliance on rumination or other automatic emotions.”

“This study helps bring these mothers into the research limelight and justifies future efforts to promote their well-being and long-term caregiving abilities,” write the authors. Their work shows that a relatively short-term, easy-to-implement group intervention program can having a lasting impact on stress reduction, likely reducing downstream health problems and positively influencing family dynamics.

Could this study have further implications? “This approach meets urgent calls to improve global mental health by training non-specialists to address unmet mental health needs,” they write. Indeed, these techniques could be integrated into basic healthcare for all parents and caregivers—not just mothers and not just those whose children have disabilities.

Summer Allen, Ph.D. is a science writer based in Providence, Rhode Island. A graduate of Carleton College and Brown University, Summer now writes for a variety of publications including weekly blog posts for the American Association for the Advancement of Science. She is also very active on twitter: follow her, or just reach out and say hello!
at 7:23 AM