How to praise kids: It’s a hot topic for many parents and educators. A lot of the conversation around it has stemmed from studies by Carol Dweck, professor of psychology at Stanford who has been researching this specific topic for many years.

“My research shows that praise for intelligence or ability backfires,” said Dweck, who co-authored a seminal research paper on the effects of praise on motivation and performance:

“What we’ve shown is that when you praise someone and say, ‘You’re smart at this,’ the next time they struggle, they think they’re not. It’s really about praising the process they engage in, not how smart they are or how good they are at it, but rather, taking on difficulty, trying many different strategies, sticking to it and achieving over time.”

But some might not know that this paradox is strongest for girls. 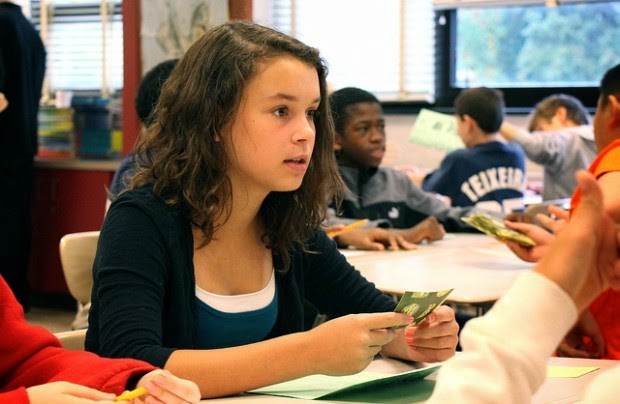 Dweck’s research, which focuses on what makes people seek challenging tasks, persist through difficulty and do well over time, has shown that many girls believe their abilities are fixed, that individuals are born with gifts and can’t change.

Her research finds that when girls think this way, they often give up, rather than persisting through difficulties. They don’t think they possess the ability to improve, and nowhere is the phenomenon stronger than in math.

“Of all the subjects on earth, people think math is the most fixed,” Dweck said. “It’s a gift, you either have it or you don’t. And that it’s most indicative of your intelligence.” This attitude presents an especially sticky problem to educators working to boost girls’ interest and passion for science, technology, engineering and math – STEM subjects.

For many boys, believing math is a fixed ability doesn’t hamper achievement — they just assume they have it, Dweck said. But girls don’t seem to possess that same confidence, and in their efforts to achieve perfection, Dweck’s research shows they shy away from subjects where they might fail.

“We have research showing that women who believe math is an acquired set of skills, not a gift you have or don’t have, fare very well,” Dweck said. “Even when they have a period of difficulty and even when they’re in an environment that they say is full of negative stereotyping.”

This research suggests parents and educators should rethink what implicit and explicit messages are being sent to young girls about achievement.

If adults emphasize that all skills are learned through a process of engagement, value challenge and praise efforts to supersede frustration rather than only showing excitement over the right answer, girls will show resilience. It also might help to provide a roadmap to correct the gender imbalance that already exists in fields requiring math and science, jobs that often involve setbacks, “failing,” and overcoming challenges.

Dweck has found that socialization and beliefs about learning ability are developed at early ages. “Mother’s praise to their babies, one to three years of age, predicts that child’s mindset and desire for challenge five years later,” Dweck said.

“It doesn’t mean it is set in stone, but it means that kind of value system — what you’re praising, what you say is important — it’s sinking in. And the kids who are getting this process praise, strategy and taking on hard things and sticking to them, those are the kids who want the challenge.”

Dweck understands it isn’t easy to praise process and emphasize the fun in challenging situations. Kids like direct praise, but to Dweck lauding achievement is like feeding them junk food – it’s bad for them.

An implicit argument here is that failure in small doses is good. Dweck’s not the first person to make that argument; advocates of game-based learning say one of its strongest attributes lies in a player’s ability to fail and start over without being stigmatized.

Students learn as they go, getting better each time they attempt a task in the game. But the current education system leaves little room for failure, and consequently anxious parents often don’t tolerate small setbacks either.

“If you have little failures along the way and have them understand that’s part of learning, and that you can actually derive useful information about what to do next, that’s really useful,” Dweck said.

She believes families should sit around the dinner table discussing the day’s struggles and new strategies for attacking the problem. In life no one can be perfect, and learning to view little failures as learning experiences, or opportunities to grow could be the most valuable lesson of all.
at 6:48 AM