From the Academy MetroWest Blog

Bruce Sabian, on Facebook: With apologies to Ann Helmus, NESCA (Neuropsychology & Education Services for Children & Adolescents), and others who are clearly not guilty, here's a new blog entry about all the jargon and psychobabble in children's evaluations. Enjoy - and please share if you like it! 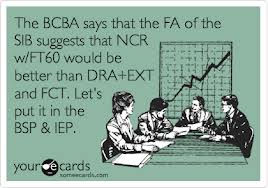 A good neuropsychological evaluation is worth its weight in gold. A thorough assessment provides invaluable data about an individual’s cognitive, emotional, and psychological functioning, the way s/he processes and organizes information, and perceives and interacts with the world.

A trained neuropsychologist takes the thousands of puzzle pieces that go into an assessment to create a coherent, rich picture of the many processes that make a person tick.

While I don’t do testing myself, I’m an educated and frequent consumer of neuropsychological evaluations. I’ve read hundreds of them over the years and have referred many of my clients for testing. I have a list of “go-to” evaluators that I like to use when I make these referrals.

I refer to them because their reports consistently meet 3 criteria that I consider essential to a good evaluation:
Of these three characteristics, the first one – doing a thorough and insightful job of administering, scoring, and interpreting testing – seems to be the least uncommon. The field of psychology involves aspects of both art and science.

Testing is perhaps the part of the field that is closest to the science end of the continuum. The people who are drawn to it tend to be strong scientific thinkers and, at least around here in the Boston area, there are a number of neuropsychologists who do excellent testing.

The other two skills are a bit “mushier” and, maybe as a result, it’s harder to find practitioners who really have them down. When it comes to sitting down with someone you’re evaluating in order to get to know them, there are some widely used interviewing techniques and protocols that examiners use to elicit information from clients. But this part of the evaluation involves at least as much art as it does science.

It’s a skill that can be developed and enhanced over the years but for the most part, you either have it or you don’t.

It may be possible to produce a worthwhile evaluation without the qualitative information obtained when you just sit down and get to know a client. But the best ones use these clinical impressions and stories to provide a multi-dimensional view of a human being rather than a mere summary of test results.

The third characteristic – writing reports that are descriptive, comprehensible and not entirely suffused with jargon – seems to be the rarest one. Bad writing can take many different forms. In the medium of the neuropsych. report, its most common expression is in writing aimed at the wrong audience. While reports are often disseminated among professionals who share a common scientific vocabulary, parents are clearly the main audience.

When bringing their children to be evaluated, parents often endure multi-month waiting lists, a high price tag, resistance from their kids, and other challenges. In return, they want a clear understanding of their child’s functioning.

Here are a few excerpts (with names removed to protect confidentiality) from some evaluations we’ve seen:

“On tasks that measure perceptual and fluid reasoning, spatial processing, and visual motor integration, ____’s scores fall within the average range. His analysis and synthesis of visual information and abstract, categorical reasoning were adequate, although visual attention/visual discrimination skills were affected by variable attention.”

“On a measure of phonological processing, for conceptualizing changing speech-sound patterns that underlie effective decoding and spelling, ____’s score was in the average range.”

“Diagnostically, ____ is indeed complex and further observations will be needed over time to clarify diagnosis. Poor modulation on several axises – attention, impulse and motor control, mood – suggest “hypofrontality” – i.e., maturational delays of the subcortical-prefrontal system – which can be linked to several diagnoses including Attention Deficit Hyperactivity Disorder, of a combined type, and a Mood Disorder, of an unspecified nature. (That is, it is unclear if his negativity and emotional lability reflects a Unipolar Depression or early symptoms of a Bipolar Disorder.)”

I consider myself to be a fairly fluent psychobabble speaker, but passages like these leave me scratching my head. A parent who has just paid thousands of dollars for such a report is not going to be able to make much use of it without the help of a qualified psychobabble/English translator. Writing like this serves only to prop up the egos of the authors who must view themselves as being just so frightfully clever.

Last year, I had a conversation with Dr. Gretchen Felopulos, a neuropsychologist at Massachusetts General Hospital – whose writing is excellent, by the way – and she had a great response when I asked her about report writing. She told me that she pushes the post-doctoral students she teaches to write in plain English for reasons centering on their own self-preservation.

Neuropsychologists who are too reliant on jargon will need to spend more time in meetings and on the phone with parents going over not only the important things – testing results and recommendations for example – but also on translating that jargon to English. It’s better to concentrate on writing clearly and comprehensibly to begin with so that time spent with their clients can focus on more important issues.

Unfortunately for parents, the only way to find a neuropsychologist who avoids these pitfalls is to ask around. Talk to other parents or professionals who have been consumers in the past and get their impressions. A good evaluation may be the most important mental health service your child ever receives. To gain a better understanding of your child’s functioning, you shouldn’t need a translator.