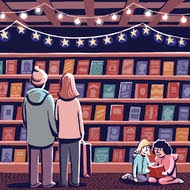 The best in picture books, middle grade and young adult fiction and nonfiction, selected by the children’s book editor of The N.Y. Times Book Review.

BABY BEAR. Written and illustrated by Kadir Nelson. (Balzer & Bray/HarperCollins, $17.99; ages 2 to 6.) A young bear, lost in the forest, is guided home by kind, wise advice from other animals in this wonderfully reassuring story from the two-time Caldecott Honor-­winning Nelson.

THE BABY TREE. Written and illustrated by Sophie Blackall. (Nancy Paulsen/Penguin, $17.99; ages 4 to 8.) This New York Times Best Illustrated award winner sweetly and comically separates fact and fiction as a little boy learns about the birds and the bees.

THE FARMER AND THE CLOWN. Written and illustrated by Marla Frazee. (Beach Lane, $17.99; ages 3 to 9.) In this visually poetic wordless book by Frazee, a two-time Caldecott Honor winner, a child clown falls from a train and is rescued by a farmer.

HANNAH’S NIGHT. Written and illustrated by Komako Sakai. (Gecko, $17.95; ages 2 and up.) This warm, respectful story features a toddler who wakes in the night and enjoys the quiet of her home, using her own resourcefulness to pass the time.

HANSEL & GRETEL. By Neil Gaiman. Illustrated by Lorenzo Mattotti. (Toon Graphic/Toon Books, $16.95; large-format edition, $29.95; ages 6 and up.) With devastatingly spare prose and fearsome illustrations, Gaiman and Mattotti bring freshness and majesty to the fairy tale, setting it during wartime.

THE JACKET. By Kirsten Hall. Illustrated by Dasha Tolstikova. (Enchanted Lion, $17.95; ages 4 to 8.) A character named Book is distraught when his jacket is ruined by his owner’s dog, but she makes him a new one in this ingenious and poignant tale.

THE RIGHT WORD: Roget and His Thesaurus. By Jen Bryant. Illustrated by Melissa Sweet. (Eerdmans, $17.50; ages 7 and up.) This picture-book biography offers a spirited portrait of Peter Mark Roget, the word-loving Victorian who found a way to help people say what they mean.

SAM AND DAVE DIG A HOLE. By Mac Barnett. Illustrated by Jon Klassen. (Candlewick, $16.99; ages 2 to 8.) Two brothers wielding shovels are determined to find “something spectacular” in this clever second collaboration between the Caldecott ­Honor-winning team of Barnett and Klassen.

THE STORM WHALE. Written and illustrated by Benji Davies. (Holt, $16.99; ages 3 to 8.) This charmingly illustrated picture book tells a simple but powerful story about a lonely boy, his hard-working single dad and a stranded baby whale that helps parent and child grow closer.

ARCADY’S GOAL. Written and illustrated by Eugene Yelchin. (Holt, $15.99; ages 9 to 12.) In this memorable illustrated novel, the Russian-born, Newbery Honor-winning Yelchin tells the story of an orphan in Stalinist Russia whose skill at soccer offers an opportunity to transform his life.

BROWN GIRL DREAMING. By Jacqueline Woodson. (Nancy Paulsen, $16.99; ages 10 to 16.) In this rich and elegant memoir in verse — winner of this year’s National Book Award for young people’s literature — Woodson tells of her gradual transformation into a writer during an African-American childhood lived between the North and the South in the Civil Rights era.

EGG & SPOON. By Gregory Maguire. (Candlewick, $17.99; ages 12 to 17.) In Maguire’s exhilarating tale of a Russia beset by floods and witnessing the possible death of magic, myth bleeds into folk tale, fairy tale and history.

EL DEAFO. Written and illustrated by Cece Bell. (Amulet. Cloth, $21.95. Paper, $10.95; ages 8 to 12.) In this lively, appealing graphic memoir, a girl who was deafened at age 4 turns her predicament around when she begins to think of herself as a superhero.

HEAP HOUSE. Written and illustrated by Edward Carey. (Overlook, $16.99; ages 10 and up.) An odd boy who lives in a crumbling mansion in an enormous ocean of trash known as the heaps discovers his family’s sinister history in this dark and wildly original urban fantasy tale.

THE MADMAN OF PINEY WOODS. By Christopher Paul Curtis. (Scholastic, $16.99; ages 9 to 12.) This exhilarating “companion book” to the Newbery Honor-winning “Elijah of Buxton” is set 40 years later, in 1901, and introduces two boys from different backgrounds who unite to solve a mystery.

THE PORT CHICAGO 50: Disaster, Mutiny, and the Fight for Civil Rights. By Steve Sheinkin. (Roaring Brook, $19.99; ages 12 and up.) With deft, efficient pacing, Sheinkin tells the little-known World War II story of 50 African-American sailors who were convicted of mutiny for protesting dangerous, racially biased treatment.

RAIN REIGN. By Ann M. Martin. (Feiwel & Friends, $16.99; ages 8 to 12.) In this emotionally satisfying story, a lonely girl with autism finds companionship in a dog her dad brings home, then faces a new set of challenges when her beloved pet goes missing in a storm.

THE RED PENCIL. By Andrea Davis Pinkney. Illustrated by Shane W. Evans. (Little, Brown, $17; ages 8 to 12.) In this graceful novel in verse, a 12-year-old who lives in South Darfur and has lost the ability to speak after suffering the horrors of war and displacement finds her voice again through the gift of a red pencil to draw with.

SISTERS. Written and illustrated by Raina Telgemeier. (Graphix/Scholastic. Cloth, $24.99. Paper, $10.99; ages 8 to 12.) In her second graphic memoir, Telgemeier finds humor and difficult truths in the story of her family’s weeklong drive to a family reunion when she was about to enter high school.

I’LL GIVE YOU THE SUN. By Jandy Nelson. (Dial, $17.99; ages 12 and up.)From opposite sides of the tragedy that changed their lives, teenage twins narrate this dazzling story about art’s capacity to heal.

THE IMPOSSIBLE KNIFE OF MEMORY. By Laurie Halse Anderson. (Viking, $18.99; ages 12 to 17.) In this wrenching novel by the multiple award-winning Anderson, a tough but fragile teenager whose father is an Iraq war veteran faces the ripple effects of post-traumatic stress disorder.

NOGGIN. By John Corey Whaley. (Atheneum, $17.99; ages 14 to 17.) A 16-year-old who had his head cryogenically preserved after dying of leukemia comes back to life in this unconventionally funny, heartfelt novel by the Printz Award-winning ­Whaley.

100 SIDEWAYS MILES. By Andrew Smith. (Simon & Schuster, $17.99; ages 12 and up.) A teenager who’s survived a freak accident that killed his mother must separate from his overprotective novelist father in this beguiling novel.

THIS ONE SUMMER. By Mariko Tamaki. Illustrated by Jillian Tamaki. (First Second, $17.99; ages 12 to 15.) This graphic novel featuring two girls who meet every summer at a lakeside vacation spot tells a ­moving and evocative coming-of-age story with complex themes.

WE WERE LIARS. By E. Lockhart. (Delacorte, $17.99; ages 12 and up.) A grandchild in a New England clan with a private island off Martha’s Vineyard tries to piece together the story of a catastrophic accident that clouded her memory in this intense, cunningly constructed novel with a surprise ending that shatters.
at 8:20 PM