"Developmentally, children benefit most from active play and social interaction, not touching a screen or pushing buttons that light up and ding."

According to the Campaign for a Commercial-Free Childhood, 64% of babies ages one to two watch TV and/or videos for slightly more than two hours daily, and preschoolers use media on average 2.2 hours to 4.6 hours a day.

Citing a lack of evidence that screen time provides educational benefits to young children, the American Academy of Pediatrics recommends that babies under age two avoid all screens - televisions, computers, tablets, and phones - and that parents monitor and manage electronic media exposure for older kids.

Developmentally, children benefit most from active play and social interaction, not touching a screen or pushing buttons that light up and ding. 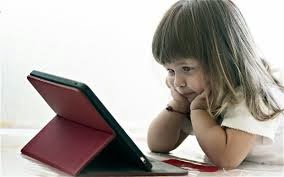 In my experience, screens occupy and calm kids when they’re grumpy, overly demanding at a bad time, or need to settle down from high-energy activities. To say this is “bad” probably won’t change anything. In my office I see 18-month-old toddlers scrolling through iPads like pros. Saying, “Don’t” may be right, but it just doesn’t work.

Given that children are using screens, I feel that it’s essential that parents have guidelines for setting limits:

In this electronics-driven world, we need to carefully balance children’s developmental needs with the lure of technology as entertainment, education, and babysitter. There are real reasons for caution—there are already 4-year-olds being treated for screen addictions.

Children are using screens at a younger and younger age, so parents must think about what they will and won’t allow.

Marcia Eckerd is an evaluator, consultant, and therapist who specializes in working with children with NLD and autism-spectrum disorders.
at 6:44 AM