Behavioral Treatment for Kids with Anxiety

Kids learn to handle the bully in the brain.

When a child shows signs of anxiety, we tend to think it will go away—she's just nervous or shy, and she'll grow out of it. But when the anxiety becomes so intense that it's seriously interfering with her life, and the life of her family, it's important to get help.

Serious untreated anxiety tends to get worse over time, not better, because the child learns that avoidance works in reducing the anxiety, at least in the short run. But as the child—and, indeed, the whole family—work to avoid triggering those fears, they only grow more powerful.

Medication is often prescribed for children with anxiety, as it is for adults. And medication—antidepressants are usually our first choice—often helps reduce anxiety. But what many people don't know is that cognitive behavioral therapy (CBT) can be very effective for kids who are anxious.

In fact, research over more than 20 years has shown that CBT is the most effective treatment for reducing symptoms of severe anxiety. And unlike taking medication, the therapy gives children the tools to manage the anxiety themselves, now and in the future. 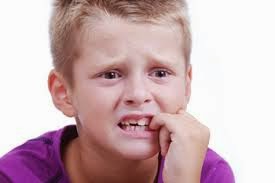 What is cognitive behavioral therapy?

Cognitive behavioral therapy is based on the idea that how we think and act both affect how we feel. By changing thinking that is distorted, and behavior that is dysfunctional, we can change our emotions. With younger children, focusing first on the behavioral part of CBT can be most effective. The goal is, essentially, to unlearn avoidant behavior.

One of the most important techniques in CBT for children with anxiety is called exposure and response prevention. The basic idea is that kids are exposed to the things that trigger their anxiety in structured, incremental steps, and in a safe setting. As they become accustomed to each of the triggers in turn, the anxiety fades, and they are ready to take on increasingly powerful ones.

Exposure therapy is very different from traditional talk therapy, in which the patient and a therapist might explore the roots of the anxiety, in hopes of changing her behavior. In exposure therapy we try to change the behavior to get rid of the fear.

Exposure therapy is effective on many different kinds of anxiety, including separation anxiety, phobias, obsessive-compulsive disorder (OCD), and social anxiety.

The Bully in the Brain

For children with anxiety disorders, the process begins by helping them, and their parents, get some distance from the anxiety and start thinking of it as a thing that is separate from who they are. One way I do this is by having them conceptualize it as a "bully in the brain," and I encourage kids to give the bully a name and talk back to him.

Kids I've worked with have called him the Witch, Mr. Bossy, Chucky, the Joker, and, in the case of some teenagers, names I cannot repeat here.

We explain that we are going to teach skills to handle the bully, giving children the idea that they can control their anxiety rather than it controlling them.

It's also important to help kids really understand how their anxiety is affecting their lives. I may actually map out things a child can't do because of his fears—like sleeping in his own bed, or going to a friend's house, or sharing meals with his own family—and how that makes him feel. Getting kids to understand how their anxiety works and gaining their trust is important because the next step—facing down their fears—depends on them trusting me.

Adopting Robert Frost's observation that "the only way around is through," exposure therapy slowly and systematically helps a child face his fears, so he can learn to tolerate his anxiety until it subsides rather than reacting by seeking reassurance, escaping, avoidance or engaging in ritualistic behaviors such as hand washing.

How does exposure therapy work?

The first step is identifying triggers. We design a "hierarchy of fears"—a series of incremental challenges, each of which is tolerable, and which together build to significant progress.

Instead of thinking in black and white terms—I can't touch a dog or I can't cross a bridge—kids are asked to consider degrees of difficulty.

We might ask a child with contamination fears, for example, "On a scale of 1 to 10, how difficult would it be to touch the door handle with one finger? To touch and open the door?"

For a child with a fear of vomiting, we might ask: "How difficult would it be to write the word vomit?" If that is a 3, saying "I will vomit today" might be a 5. To see a cartoon of someone vomiting might rate a 7. To watch a real video of someone vomiting might be a 9. At the top of the hierarchy would likely be eating something the child thinks will make him vomit.

By rating these different fears, kids come to see that some are less extreme, and more manageable, than they had thought.

Next, we expose the child to the trigger in its mildest possible form, and support him until the anxiety subsides. Fear, like any sensation, diminishes over time, and children gain a sense of mastery as they feel the anxiety wane.

With a child who is severely anxious—who can, for instance, barely leave his room for fear that his parents will die, or must wash his hands dozens of times a day to avoid contamination—I may work with him several times a week, for several hours at a time. We do exposures in the office and then, when a child is comfortable enough, do them outside.

For someone with social anxiety, for instance, we might go out wearing silly hats, or walk a banana on a leash. For someone afraid of contamination, we might ride the bus together, or shake hands with strangers, then eat chips without washing.

Once we have worked through some exposures and he is feeling more confident, I assign homework to practice what we did in the sessions. We want kids to really master their exposures before moving up the ladder. And parents are taught to help kids progress by encouraging them to tolerate anxious feelings, rather than jumping in to protect them from their anxiety.

Treatment for mild to moderate levels of severity usually takes eight to 12 sessions, and some kids make more progress if they are also taking medication to reduce their anxiety, which can make them more able to engage in therapy.

It's important to understand that exposure therapy is hard work, both for kids and their parents. But as fear diminishes, kids get back to doing things they like to do, and the family gets back a child they feared they had lost—and that's a great reward.
at 6:18 AM