How Witnessing Violence Affects a Child, and How to Help

“The bad guys are far outnumbered by people that are willing to help.”

“Am I going to go to jail for hitting you?” my 4-year-old son asked me the other night as I helped him get ready for bed.


Earlier in the day he’d had a temper tantrum when I picked him up from school. On the teary walk to our car he yelled that I was a “mean mommy” and “so rude,” and then balled up his fists in frustration and hit my leg twice. These are the hits that he was worried about.

“Of course not,” I said, in answer to his question.

I explained that while it was never O.K. to hit, consequences for adults and children — especially little guys like him — are not the same. He nodded as he listened, but his expression showed that he was still confused. I understood why. 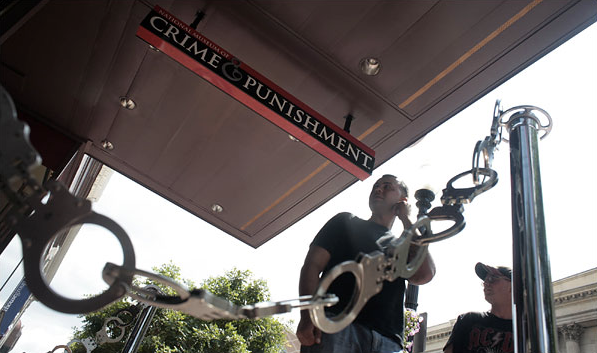 On a freezing afternoon last winter, the two of us were running errands in our Brooklyn neighborhood when we were randomly attacked by a stranger. As we headed toward a store’s entrance, holding hands and talking, I was grabbed from behind with a force that lifted me into the air and ripped the hood straight off my jacket. My head snapped to the side as I was punched in the temple and thrown onto the sidewalk. My son ended up on the ground next to me. We were both screaming. My attacker, on top of me, punched me in the face. I thought I was going to die.

But I didn’t. A young man quickly intervened, and after he pushed my attacker off me, I was able to jump up, throw my son over my shoulder and run inside the store. I screamed for someone to call 911 as I headed down an aisle, then sunk down to the ground and pulled my son on my lap. We were safe.

Being the victim of a violent and random assault was one of my worst fears realized. While I’m lucky that my son was uninjured, and my injuries — head trauma and a battered face — healed, we’ve both suffered psychologically. Now, almost a year later, I still see the repercussions of that attack play out in my son’s questions and behaviors on a regular basis.

My son, unfortunately, is not alone. Whether it’s a bully acting out on the school playground, domestic abuse in the home or a random assault in the community, 60 percent of children in the United States are exposed to violence, crime or abuse on an annual basis, a 2009 Department of Justice report found. The numbers in many countries are far larger. As I struggled to explain this violence to my son, I’ve thought of other parents who are grappling with how to have a similar conversation with their children. So I sought help from experts.

After a child is exposed to violence, maintaining routines is important, I was told. In the days after my attack, I asked my son to walk down the block with me to get croissants and coffee — something we did often. But he wasn’t having it. In fact, he flat out refused to go anywhere alone with me because he was worried the “bad guy” was coming back for us. This was heartbreaking.

Steven Marans, a professor, psychoanalyst and director of the National Center for Children Exposed to Violence at Yale, says that in all cases of trauma, “the context matters.”

In our case, the fact that my son watched his mother — the very person meant to protect him and ensure his safety — get attacked had a direct impact on our relationship. Dr. Marans explained this behavior as my son’s way of trying to control the situation and prevent something similar from happening again. “The danger that happened does not exist anymore,” he said. “But that’s not what it feels like to him.”

As he processed what had happened, my son re-enacted the attack countless times to friends, family, teachers and even strangers.

“A bad guy got my mommy and went hit, hit, hit,” he’d say, punching the air. This, too, was normal behavior, Dr. Marans said. Kids often use play to work through trauma.

My son asked about the specifics of what had happened over and over again. He mostly focused on my physical injuries — why one of my eyes was black and the other was not — and where the police had taken the attacker.

My husband and I went with the simplest explanations, which was the right approach, according to Dr. Robert J. Hilt, a child psychiatrist and pediatrician at Seattle Children’s Hospital. You can just say, “the police have taken him away and we’re not going to see him again,” Dr. Hilt said. For older children, you can start introducing more nuances and get into the idea of courts and trials, he continued.

While all this made sense, I was still furious that my son had to experience this — to have his innocence shattered — at such a young age.

Dr. Hilt, though, pointed out the bigger picture. “There are people in the world that we need to avoid,” he said. “You try not to have that lesson be introduced at age 3, but it is an appropriate life lesson.”

As time passed, my son talked about the attack less and less, and life returned to normal. That is until he entered prekindergarten this fall and started bringing it up again in new, more intelligent ways.

“It’s natural for it to be coming up over time,” said Lia Amakawa, a clinical psychologist specializing in post-traumatic stress disorder and trauma at Rennicke & Associates in New York City. It takes time to process a traumatic event, she said, and that timeline is different for every person. My son was likely bringing up what happened because he’d hit a new developmental phase, and he was revisiting the attack “but seeing it in a different way,” she said.

So what should we do?

“Be open to talking, and validate the experience,” Dr. Amakawa said. When my son asked if the “bad guy” was a bully, like a character in a Berenstain Bears book we recently read, I answered that he was.

When we talked about being nice and treating others with respect, my son wondered why that attacker hadn’t been nice to me. “Would he have still hurt you if you told him your name?” he asked. That probably wouldn’t have helped, I said.

And after my son lashed out and hit me, he connected his action to the attack. Why wouldn’t he go to jail, he wondered. Isn’t that what happens when you hurt someone? “Sometimes,” I said. “But not if you’re 4.”

Keeping an open dialogue has helped my husband and me clear up much of the fear and the confusion that the attack caused. When answering these questions, we’ve tried to strike a balance between being honest and staying age-appropriate.

We also, whenever possible, try to impart the larger life lesson that the world is good, and that this was an isolated incident that will likely never happen again.

Or as Dr. Amakawa said: “The bad guys are far outnumbered by people that are willing to help.”
at 7:51 AM