Kids Get Enough Tech Outside of School—Shouldn’t the Classroom Offer Them Something Different?

"...precisely because young people spend so much time with digital media outside of school, schools must offer them a very different kind of education in order to even the cognitive scales."

Four thousand hours: That’s approximately the number of hours of digital media content U.S. youths aged 8 to 18 absorb each year. (If you doubt that’s possible, be sure you’re taking into account the near-universal practice of “media multitasking,” or consuming content on more than one platform at a time, as when a teenager listens to a song on his MP3 player while scrolling through Facebook on his smartphone while watching a video on his laptop.) 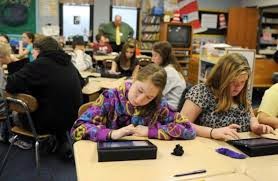 Parents, teachers, and education writers, myself included, think a lot about what our students are taught in school, the debate over the Common Core being just the latest example. But we think very little about what they’re taught in the blue glow of their screens.

In fact, we likely assume they’re not learning much at all from their video games and their social networks and their celebrity news websites.

Patricia Greenfield, a developmental psychologist at UCLA and a longtime observer of the relationship between children and technology, begs to differ. There is the formal education that young people receive in school, she maintains, and the “informal education” they receive through their devices.

Greenfield, whose thoughtful writings and pioneering research span the pre-Internet era to the present day, has always been alert to the benefits of engagement with technology. Thirty years ago, amid a general panic that Pac-Man was rotting children’s brains, Greenfield was one of the first to suggest that video games could foster the development of complex skills like spatial visualization and inductive reasoning.

More recently, she has explored the way the Web is shaping young people’s thinking, often in positive ways. And so, in the face of striking numbers like the ones that started off this article, her concern is not that the minds of American youth are becoming vacuous. It is, rather, that their minds are becoming lopsided: too schooled in one type of media, and not well enough acquainted with others.

Although we tend to think and talk about “technology” and “media” as undifferentiated monoliths, Greenfield’s work reminds us that each medium has its strengths and weaknesses in conveying information. Each medium, in turn, exercises and develops different faculties in us, its users.

Video games, as Greenfield noted early on, are exceptionally good at building players’ spatial skills (which are themselves important not only for future careers in the STEM fields, but also because they aid in the here-and-now understanding of classroom mathematics). It even appears to be the case that differences in the informal educations of boys and girls account for a large part of the gender gap in spatial skills.

That is, boys play more video games, and so get more informal practice in mentally manipulating three-dimensional objects.

One study, published in the journal Psychological Science, found that giving girls practice at playing action video games nearly eliminated the difference in spatial cognition between the girls and their male counterparts.

Video games are also excellent vehicles for developing the skill of inductive reasoning. Watch a young person learning his way around a new video game: he won’t get out the manual and read about it first. Instead, he’ll jump right into playing, figuring out the internal structure of the game as he goes. This process, Greenfield notes, is the essence of the scientific method, and could be useful training for scientific thinking.

For its part, video excels at depicting action, and young people’s immersion in video has sharpened their visual capacities and their ability to divide their attention among many things happening at once on the screen. Audio, meanwhile, enhances listeners’ appreciation for dialogue and for figurative and expressive language. Audio formats also seem to nurture students’ imaginations.

In a classic study Greenfield conducted with two co-authors, children who listened to a story that was stopped just before its conclusion wrote more imaginative endings than children who saw and heard the same story as an animated cartoon.

The printed word is a technology, too, Greenfield notes, albeit one that is several thousand years older than the others. It is unsurpassed at inducing its users to take the perspective of another, to enter inside the thoughts of authors or their characters.

Written language encourages reflection — there’s no risk that the reader will lose her purchase on fast-moving action if she pauses to think — and builds vocabulary and content knowledge, which in turn enable ever more fluent reading and ever more sophisticated comprehension.

A “balanced education,” Greenfield has written, would incorporate all of these media, selecting each medium according to its strength in conveying information, and promoting in students what Greenfield calls a well-rounded “cognitive profile.”

That sounds like an endorsement of technology, lots of it, in the classroom. But any appraisal of a balanced education must take into account the informal education students are now getting — those four thousand hours of media consumption — and then the imperatives for teachers begin to look quite different.

One argument often made for technology in our schools is that tech is what students use when they’re outside of school; when teaching these “digital natives,” we’re told, we have to “meet them where they are.” The balanced-education formulation advanced by Patricia Greenfield argues just the opposite: precisely because young people spend so much time with digital media outside of school, schools must offer them a very different kind of education in order to even the cognitive scales.

In Greenfield’s view, this means reading copious amounts of old-fashioned literature — just what young people are not doing (according to research) on their own time. I would add that schools could also strive to provide more of the face-to-face contact, the in-person social interaction, that has been largely displaced by young people’s use of Facebook, Twitter and texting in their off-hours.

Greenfield’s argument, though a response to our high-tech times, is really an iteration of an old debate: Should schools be mirrors of society, or should they be places apart? With Greenfield, I come down for the latter. Schools have an opportunity to take students’ minds in new directions, and they’ve only got a thousand hours each year to do it.

This story was produced by the Hechinger Report, a nonprofit, nonpartisan education-news outlet based at Teachers College, Columbia University.
at 8:36 AM