The Power of Mindfulness

By now, there's a very good chance you've heard the term "mindfulness." Suddenly, it seems to be everywhere—touted as the new yoga, the answer to stress, the alternative to Xanax.

But beyond the buzz, what is it?

Jon Kabat-Zinn, the scientist and widely recognized father of contemporary, medically-based mindfulness--over 30 years ago he developed a therapeutic meditation practice known as Mindfulness-Based Stress Reduction (MBSR)--defines mindfulness simply as "paying attention in a particular way: on purpose, in the present moment and non-judgmentally."

That's the short version. To expand on that just a little, mindfulness is a meditation practice that begins with paying attention to breathing in order to focus on the here and now—not what might have been or what you're worried could be. The ultimate goal is to give you enough distance from disturbing thoughts and emotions to be able to observe them without immediately reacting to them.

In the last few years mindfulness has emerged as a way of treating children and adolescents with conditions ranging from ADHD to anxiety, autism spectrum disorders, depression and stress. And the benefits are proving to be tremendous.

But how do you explain mindfulness to a five year-old? When she's teaching mindfulness to children, Dr. Amy Saltzman, a holistic physician and mindfulness coach in Menlo Park, CA, prefers not to define the word but rather to invite the child to feel the experience first—to find their "still, quiet place."

"We begin by paying attention to breath," she says. "The feeling of the expansion of the in-breath, the stillness between the in-breath and the out-breath. I invite them to rest in the space between the breaths. Then I explain that this still quiet place is always with us—when we're sad, when we're angry, excited, happy, frustrated. They can feel it in their bodies. And it becomes a felt experience of awareness. They can learn to observe their thoughts and feelings, and the biggest thing for me is they can begin to choose their behaviors."

In her private practice, Saltzman, and her Still Quiet Place CDs for Young Children and Teens, teaches mindfulness to children and adolescents with a variety of challenges. "I work with kids individually with ADHD, with anxiety, depression, autism, anger management issues. The lovely thing about working one-on-one is you get to tailor what you offer to them."

Saltzman also conducted a study in conjunction with researchers at Stanford University showing that after 8 weeks of mindfulness training, the fourth through sixth graders in the study had documented decreases in anxiety, and improvements in attention. They were less emotionally reactive and more able to handle daily challenges and choose their behavior.

As a teacher at The Nantucket New School, where every student gets instruction in mindfulness, Allison Johnson has learned first hand what a difference it can make for kids. So she tried it at home:

"I have a six-year-old son with ADHD," she says. "I brought a chime home. We use it most nights before bed. 'Cause he doesn't love going to sleep. We sit on the floor facing each other, we close our eyes and we ring the chime. Sometimes we incorporate a visualization—like he's floating on a cloud. We go on this little journey. And we ring the chime again and we say 'when you can no longer hear the chime it's time to open your eyes and come back to focus.'

And now, if he gets in trouble and gets sent to his room, I can hear him upstairs doing it himself. Or, when he's getting rowdy, he'll say, 'okay, lets do our mindful breathing now.'"

Johnson says since Curren started practicing mindfulness she's seen subtle but noticeable differences in his behavior. "He's more able to bring his focus and attention back to where they were—remembering to raise his hand and not move around so much." 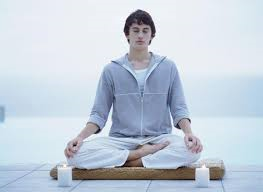 While the research on children and adolescents is really just beginning to gain real traction, there are several small studies showing that for kids who suffer from anxiety and ADHD, mindfulness can be especially helpful. Diana Winston, author of Wide Awake and the Director of Mindfulness Education at UCLA's Mindful Awareness Research Center, started taking teens with ADHD on retreats for what she calls "mindfulness intensive camp" back in 1993. Twenty years later the program is still going strong.

"Teens benefit tremendously," she says. "Kids talk about their lives being transformed. I remember one girl with ADD who'd been very depressed and I didn't think we were reaching her. On the last day of class she came in and said, 'everything is different. I was really depressed. My boyfriend broke up with me and it's been so hard but I'm finally understanding that I'm not my thoughts.' That concept is huge—the non-identifying with the negative thoughts and having a little more space and freedom in the midst of it."

Stress reduction and self-acceptance are two of the major perks of mindfulness, benefits Winston says are particularly important during the drama and turmoil-filled teen years. "Emotional regulation, learning how to quiet one's mind—those are invaluable skills."

Randye Semple, Ph.D., an assistant professor at USC's Keck School of Medicine, has spent her career developing programs to teach anxious kids how to quiet their minds. "When I look at childhood anxiety I see an enormous problem and a precursor to other problems in adolescents and adults," she says. "So I figured if we could manage the anxiety we could head off a lot of the other problems."

Mindfulness-Based Cognitive Therapy for Anxious Children, the book she co-authored, is based on the program she developed. A study she and her co-author, Clinical Psychologist Jennifer Lee, conducted from 2000-2003 showed significant reductions in both anxiety and behavior problems in 8- to 12-year-olds in Harlem and Spanish Harlem who participated in the program.

Teaching mindfulness to children and adolescents is a growing trend—in private practices as part of therapy and increasingly as part of the curriculum in both Special Ed and General Ed classes throughout the country.

"We're at the beginning of a movement," says Megan Cowan, co-founder and executive director of programs at Mindful Schools in Oakland, California.

This is the first of a three-part series: