Is This Kid Too Young for Football?

From Boston University
via Futurity

As the 100 million viewers tuning in to this Sunday’s Super Bowl can attest, Americans adore football. And for many, the love affair begins in childhood. But...

A new study points to a possible increased risk of cognitive impairment from playing youth football.

Researchers from Boston University School of Medicine found that former National Football League (NFL) players who participated in tackle football before the age of 12 are more likely to have memory and thinking problems as adults.

The study contradicts conventional wisdom that children’s more plastic brains might recover from injury better than those of adults, and suggests that they may actually be more vulnerable to repeated head impacts, especially if injuries occur during a critical period of growth and development. 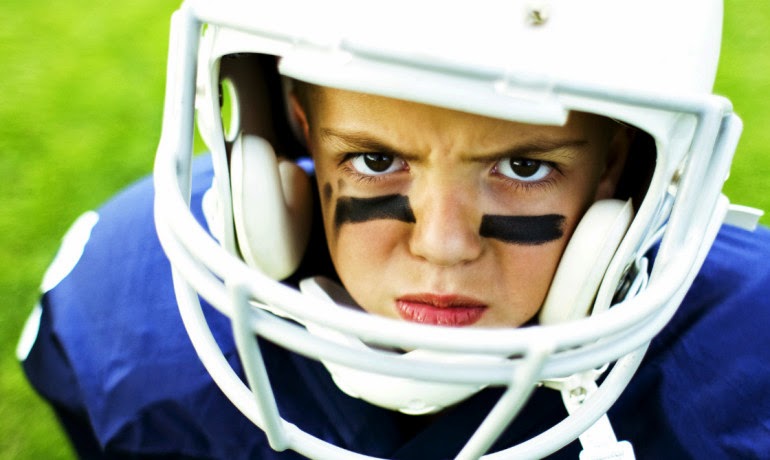 “Sports offer huge benefits to kids, as far as work ethic, leadership, and fitness, and we think kids should participate,” says study lead author Julie Stamm, a Ph.D. candidate in anatomy and neurobiology. “But there’s increasing evidence that children respond differently to head trauma than adults.

“Kids who are hitting their heads over and over during this important time of brain development may have consequences later in life.”

“This is one study, with limitations,” adds study senior author Robert Stern, a professor of neurology, neurosurgery, and anatomy and neurobiology and director of the Alzheimer’s Disease Center’s Clinical Core.

“But the findings support the idea that it may not make sense to allow children—at a time when their brain is rapidly developing—to be exposed to repetitive hits to the head.

“If larger studies confirm this one, we may need to consider safety changes in youth sports.”

CTE is a neurodegenerative disease often found in professional football players, boxers, and other athletes who have a history of repetitive brain trauma. It can currently be diagnosed only by autopsy.

For this latest study, published in the journal Neurology, scientists examined test scores of 42 former NFL players, with an average age of 52, all of whom had experienced memory and thinking problems for at least six months. Half the players had played tackle football before age 12, and half had not.

Significantly, the total number of concussions was similar between the two groups.

Researchers found that the players exposed to tackle football before age 12 had greater impairment in mental flexibility, memory, and intelligence—a 20 percent difference in some cases. These findings held up even after statistically removing the effects of the total number of years the participants played football. Both groups scored below average on many of the tests.

“We were surprised by how striking the results were,” says Stamm. “Every single test was significantly different, by a lot.”

Stamm says the researchers were especially surprised by the scores on a reading test called the WRAT-4, which has participants read words of increasing difficulty. A person’s score depends on the ability to pronounce the words correctly, indicating the person’s familiarity with complex vocabulary.

The low scores may be significant, she says, because they suggest that repeated head trauma at a young age might limit peak intelligence. She emphasizes, however, that there may be other reasons for a low score, and that more research is needed.

The authors chose age 12 as the cutoff because significant peaks in brain development occur in boys around that age. (This happens for girls a bit earlier, on average.) Around age 12, says Stern, blood flow to the brain increases, and brain structures such as the hippocampus, which is critical for memory, reach their highest volume.

Boys’ brains also reach a peak in their rate of myelination—the process in which the long tendrils of brain cells are coated with a fatty sheath, allowing neurons to communicate quickly and efficiently. Because of these developmental changes, Stern says, this age may possibly represent a “window of vulnerability,” when the brain may be especially sensitive to repeated trauma.

“If you take just the hippocampus, that’s a really important part of your brain,” he says. “It may be that if you hit your head a lot during this important period, you might have significant memory problems later on.”

Stern adds that a study by another group of researchers of the number and severity of hits in football players aged 9 to 12, using accelerometers in helmets, found that players received an average of 240 high-magnitude hits per season, sometimes with a force similar to that experienced by high school and college players.

With approximately 4.8 million athletes playing youth football in the United States, the long-term consequences of brain injury represent a growing public health concern. This study comes at a time of increasing awareness of the dangers of concussions—and subconcussive hits—in youth sports like football, hockey, and soccer.

In 2012, Pop Warner football, the oldest and largest youth football organization in the country, changed its rules to limit contact during practices and banned intentional head-to-head contact. When reached by phone at the organization’s headquarters in Langhorne, Pennsylvania, a Pop Warner spokesman declined to comment on the study until they had more time to examine the results in detail.

“Football has the highest injury rate among team sports,” writes Christopher M. Filley, a fellow with the American Academy of Neurology, in an editorial accompanying theNeurology article. “Given that 70 percent of all football players in the United States are under the age of 14, and every child aged 9 to 12 can be exposed to 240 head impacts during a single football season, a better understanding of how these impacts may affect children’s brains is urgently needed.”

Filley’s editorial cautions that the study has limitations: because the researchers could not precisely determine the players’ lifetime number of head impacts, it may be the total number of hits—rather than the age of a player—that is the more critical measurement.

In addition, because the study focuses on professional athletes, the results may not apply to recreational players who participated in youth football, but did not play beyond high school.

How to Make Football Safer for Kids

Stamm says that the next stage of research is to work with colleagues at Brigham and Women’s Hospital to conduct detailed neuroimaging of the same types of players involved in the current study, looking for underlying changes in brain anatomy that might correlate to the cognitive impairment.

She adds that this paper is a small, first-of-its-kind study, and needs to be expanded and replicated before scientists can make further recommendations about children playing contact sports. But she hopes the study will shed more light on the possible consequences of repeated head trauma in children.

She notes that some youth football organizations have taken great steps in reducing the numbers of hits to the head. However, more research is needed to see if these measures are sufficient, or if additional precautions, like substituting flag football for tackle football in those under 12, may be necessary.

“Sports are important, and we want kids to participate in football,” says Stamm. “But no eight-year-old should play a sport with his friends and end up with long-term problems. We just want kids to play sports more safely.”

The National Institutes of Health funded the study.
at 7:21 AM