Media Guidelines for Kids of All Ages

Tips for making sure your children's screentime is healthy.

Parents used to just worry about kids watching too much TV, or playing too many video games. We still worry about those things, but now the list has gotten much longer. Phones, tablets, apps, social media, texting—they all can captivate kids (and adults) starting at a very young age. What's a parent to do?

Going back to bed isn't an option, but taking a deep breath and advocating rational moderation is. 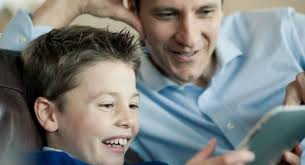 Here are some tips, broken down by age group, to get you started.

Limit exposure. The American Academy of Pediatrics recommends avoiding television and other entertainment media for children under two years. "A child's brain develops rapidly during these first years, and young children learn best by interacting with people, not screens," the pediatricians say.

Start leading by example early. Even before your child has a phone or tablet of her own, show her how they should be used. Don't check your messages at the dinner table. Look at people when they're talking to you—not at your phone. Remember that your children are always watching you and young children notice everything—that's how they learn.

Don't underestimate the value of traditional toys and open spaces. It's important for kids to experience unstructured "free play," which means that they decide what to do, and how to do it, and are playing simply for play's sake—not to get to the next level in a game, or learn some specific skill. Children should experience the fun of making up their own rules—and breaking them—as they go along. This kind of play lets kids:

Apps—however educational they claim to be—are no substitute for the kind of learning that comes to kids naturally if we let it.

Do leave the tablet at home. While they're helpful during a long car or plane ride, tablets and other devices are out of place in the stroller or car on the way to preschool. It's important for kids to have the opportunity to look around them and find entertainment (not to speak of learning) in the real world, too. And they should not be part of play dates!

Watch things together. If you're worried that your kids are getting bad messages from the media, the best way to counteract them is to watch alongside your kids and point out when something isn't right. Call out a female character if she only seems to care about boys, or how she looks. Provide context if you are seeing unhealthy relationships (including friendships) or unrealistic beauty standards.

Besides reinforcing your values, this will teach your kids to watch television and movies actively, not passively, which is good for their self-esteem. Do this during commercials, too!

Screentime shouldn't be all the time. The AAP says that children and teens should only be using entertainment media for two hours or less a day, and also stresses that that media should be of "high quality."

Be discerning. Determining what is high quality and what isn't might not be obvious, but look out for things that:

Common Sense Media has more pointers here. Conversely, if you don't want your child playing a particular game, explain your reasons why and be specific—don't just say it's "bad."

Don't make screens the reward (or consequence). Technology is enormously appealing to kids as it is, but when we make screentime the go-to thing kids get for good behavior—or get taken away for bad behavior—we're making it even more desirable, thereby increasing the chances that a child will overvalue it.

Encourage other activities. There are many ways to have fun. Running around outside, playing a sport, reading books, doing crafts—variety is important for a balanced life. Encourage your kids to develop a wide range of interests. Model yourself doing this, too. Let your kids see you reading a book and making things and having a hobby. Finally, present these things as just as rewarding as screentime—not alternatives to it. Equal billing is important.

Keep modeling good tech behavior. It's easy to let things slide once kids are older and have their own devices, but remember that the old rules still apply. Don't use your phone at the table and make sure your kids don't need to compete with a screen for your attention. Besides setting a good example, this shows them that you care and are interested, which makes them more likely to open up. Even though they're getting older, your kids still need to talk to you, not just their friends.

Encourage privacy. Once you've turned 13 you are allowed to get an account on Facebook and most other social media websites and apps (some kids cheat and get them earlier). Whatever age your family decides is appropriate for social media, make sure that your child is very careful about privacy.

Research privacy settings with her and make sure she understands when something is public or private—or somewhere in the middle—and how that should affect what she posts. As a general rule, she shouldn't share anything online that she wouldn't be comfortable with the entire world reading. Including her grandmother.

Yes to friending, no to spying. If your child is on social media, developmental psychologist Donna Wick of Mind to Mind Parent recommends that you follow or friend him, and monitor his page. But she advises against going through text messages unless there is cause for concern:

"If you have a reason to be worried then okay, but it better be a good reason. I see parents who are just plain old spying on their kids. Parents should begin by trusting their children. To not even give your kid the benefit of the doubt is incredibly damaging to the relationship. You have to feel like your parents think you're a good kid."

Make it clear that naked pictures are a bad idea (and explain why). Sometimes kids think sharing photos is a way to build trust, but it can do the opposite just as easily. Your daughter might trust her boyfriend with her photos but he, in turn, might trust a close friend, and so on. Or she might trust him to delete the photos, but later finds out that he kept them on his phone, and people found them when they were scrolling through his pictures.

Texting can be tricky. Warn kids that it's easy for people to misinterpret messages when they aren't hearing the tone of your voice or seeing the expression on your face. Jokes, in particular, might seem mean. To guard against misunderstandings and hurt feelings, it's always a good idea to make it clear when you're joking.
at 7:19 AM