Parents often use therapy as a last resort, said Kate Leyva, a licensed marriage and family therapist specializing in working with children, teens and families in Lafayette, California.

So, by the time your child starts working with a therapist, you may be feeling helpless, scared, angry and ashamed. Many parents do, said Clair Mellenthin, LCSW, a child and family therapist. “Many parents feel shame for not being able to ‘parent’ their child’s emotional and behavioral difficulties and struggles away.”

In your overwhelmed and worn-out state, you may say things to your child about therapy that aren’t helpful. Or you might think you’re being helpful, but your words end up inadvertently isolating them. “When parents get to this point it can often be hard to take a step back and think about the impact of what they are saying,” Leyva said.


Below, you’ll find common comments parents make to their kids that aren’t helpful and statements that are. Parenting is stressful, so this isn’t about judging or blaming yourself for saying the wrong thing. Instead, the key is to learn from your mistakes and support your child in the best way you can, while understanding, of course, that you’re also human. 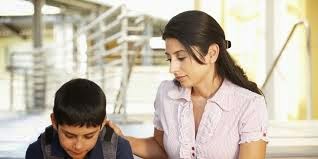 “The therapist is going to help you with your problems. You need help.”

According to Leyva, this statement and others like it can be problematic “because they can pathologize a child and make them feel shame.” They imply that the child is at fault. And it makes it seem as though therapy is a punishment for acting out or behaving in other undesirable ways, she said.

“We can’t help you anymore because your problems are too big.”

Similarly, this statement sends the unintended message that “you are too big of a problem; we aren’t able to control you or your problems,” said Mellentin, also a play therapist and clinical director at Wasatch Family Therapy.

A better statement, she said, is: “We are going to work on these problems together.”

“We have to go to therapy because your Dad or Mom left us.”

This kind of statement creates an “us against him or her” mentality, and may potentially alienate the other parent, Mellenthin said. She shared this more helpful alternative:

“We are going to talk to a special therapist who can help us talk about and understand the changes in our family.”

She also shared these two examples for introducing therapy to your child: “We are going to meet with a special therapist who can help us talk about our worries and big feelings inside,” or “Therapy is to help our family heal together because we have been going through a hard time lately.”

“You need to go to therapy because since the divorce you have been really emotional and difficult to deal with.”

This statement blames the child, Leyva said. Instead, she coaches parents to be honest and direct with their child about why they’re going to therapy (without blaming them).

She changed the above statement to: “Your mom and I have noticed that our divorce has been really hard on you and we thought it would be helpful for you to get some extra support.”

“If you don’t stop it right now, I will call your therapist!” or “Your therapist is going to be so disappointed in you for doing _____.”

According to Mellentin, “These types of statements are potentially damaging to the child because it takes away their feelings of trust and safety with their therapist, especially if they feel it’s ‘them against me.’”

Therapy is a safe and neutral place for children to explore their worries, feelings, behaviors and their world, she said.

“This is what went wrong” or “Maybe you can help X with learning how to better control his emotions when he doesn’t get his way” (speaking to the therapist).

While parents’ intentions are often to share valuable information with Leyva or encourage their child to talk, these comments typically cause kids to feel ashamed and embarrassed. They feel like their parents are “telling on them to their therapist,” Leyva said. They feel “as if they don’t have any control over the personal information that is shared about them.”

This, again, makes therapy seem like a punishment. Instead, Leyva reiterates to both parents and kids that therapy isn’t a penalty for being bad and she’s not upset with them for their behavior.

She also prefers to gently bring up potentially concerning topics directly with the child. And she lets the child tell her, in their own words, what happened and what the experience was like for them.

In general, it’s important to be mindful of the conversations you have with the therapist in front of your kids. “Most parents do not realize that children are exceptional at overhearing and listening,” said Kay Sudekum Trotter, Ph.D., LPC-S, a counselor who specializes in working with young children and adolescents.

Some parents have whispered to Trotter about their frustrations over having to spend money on therapy and make time to take their child to therapy. Others will roll their eyes. Kids pick up on these frustrations and negative feelings.

For instance, Trotter has noticed that when the cost of therapy is mentioned, a child who knows the value of a dollar will become visibly uncomfortable, possibly feeling guilt or shame.

“The non-verbal communication parents send their children is very important,” Trotter said. For instance, she suggested parents wait in the lobby for their kids during their session instead of running errands. When you stay, you’re “non-verbally saying to your child ‘you’re so important to me that I will be here the whole time supporting you.'”

Sometimes, the therapist might ask you to join your child in session. Staying in the lobby gives you this opportunity. “I commonly will be in the middle of a session with a child or teen and say to them ‘lets ask your mom to join us today,'” Trotter said.

Parenting is stressful. It’s especially stressful and challenging when your child needs therapy. But words are powerful. And they can affect how your child feels about therapy and themselves.

Help your child through the process by reinforcing that therapy isn’t a punishment or a place for fixing themselves; that your child isn’t going because they (or you) have failed in some way.

Therapy is a “safe place to find support and an unbiased adult to listen,” Leyva said. It’s not a place where you will be judged.
at 6:37 AM