Why More Schools are Letting their Students Sleep In

From the HuffPost Healthy Living Blog

It can be downright Sisyphean to get a teenager out of bed. Just like adults, they're often significantly sleep-deprived -- and the first period bell is doing them no favors. 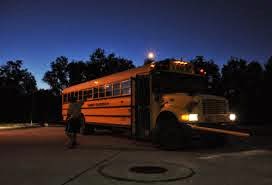 Adolescents have been steadily logging fewer hours of sleep over the last 20 years, according to a recent study. Surveys from the early 1990s found that 52 percent of 15-year-olds and 36 percent of 18- year-olds got at least seven hours of shut-eye a night, LiveScience reports. For teens in 2011 to 2012, those numbers dropped to 43 and 33 percent, respectively.

The National Sleep Foundation currently recommends that teens age 14 to 17 need eight to 10 hours a night, while and 18- and 19-year-olds should aim for seven to nine.

But between homework, field hockey practice, band rehearsal and, let's face it, new episodes of "Pretty Little Liars," it can seem like there simply aren't enough hours in the day for teenagers to get adequate rest. To help combat this chronic sleep deprivation in teens, some schools are implementing a seemingly obvious solution: just start later.

The American Academy of Pediatrics made a landmark policy statement in August, 2014 recommending later school start times, and several districts across the country are finding success doing just that.

In Honolulu, the School for Examining Essential Questions of Sustainability, or SEEQS, starts the school day at 8:30 a.m. with 45 minutes of physical activity before any classroom learning takes place. In Massachusetts, Deerfield Academy shifted start times to 8:30 a.m. from 7:55 a.m. A 2014 Deerfield viewbook notes how quickly the benefits of the change, which the school implemented in 2008, became clear:

Some experts note that part of the push for later school start times is about acknowledging the way young people's bodies work.

"Younger individuals tend to have a bit more of a circadian delay, which means they want to go to bed later and get up later naturally," W. Christopher Winter, the medical director of the Martha Jefferson Hospital Sleep Medicine Center, told The Huffington Post. "To force a child to get up really early is sort of working against this inherent biological rhythm."

This inherent desire to sleep, Winter said, doesn't just make kids and teens drag in the early morning -- it also limits their ability to learn during morning classes and increases the risk of car accidents on their way to school.

According to a new poll, parents are coming around to the idea of letting kids hit the snooze button. A survey conducted in November and December, 2014 by the University of Michigan C.S. Mott Children's Hospital as part of its National Poll on Children's Health found that about half of parents of teenagers whose schools start before 8:30 a.m. would support a later school start time. Forty percent said a later start time would allow their teens to get more sleep, and 22 percent said a later start time would help their teens do better in school.

"This would be a major shift in terms of the rhythm of daily life of children and families of children at those ages," Matthew M. Davis, the director of the National Poll on Children's Health and a professor of pediatrics and internal medicine at the U-M Medical School, told The Huffington Post.

"It's too early to say it's a movement across the country, but with half of parents saying they're willing to support a shift toward later school start times, our study supports that when schools consider making this shift many parents are going to be in favor of it."

The poll also revealed some of the complications that starting later could cause. Of the parents who remained unconvinced about delaying start times, many cited obstacles such as financial burdens, transportation issues and shortened windows for after-school activities.

Thirty minutes may not seem like a big deal, but as Winter said, "If you're starving, nobody turns their back on a half a plate of food!" Even a 15- or 20-minute delay at least sends the message that a school or school system values sleep and the ever-expanding research about its importance, he said. "There may not be a way for us to completely eliminate the school start time [issue], but we are at least taking steps to move in that direction."

In Kenston, Ohio, officials decided in 2012 to change middle and high school start times from 7:20 a.m. to 7:50 a.m. "Beyond medical studies, when you step back and look at students getting up for school between 5:30 and 6 a.m. to catch a bus by 6:30 a.m. with many juggling jobs, sports, homework and extracurricular activities, there had to be a better way," Robert Lee, then-superintendent in Kenston, told the News-Herald at the time.

While Kenston doesn't have statistical data reflecting the payoffs of the change, current Superintendent Nancy Santilli said the switch has been positive. "It has worked well for our district allowing our younger students a little more 'sleep' time and hopefully mornings that are not as rushed and stress filled," she wrote to HuffPost in an email. She added that students now board their buses in daylight, which adds an additional layer of safety to the a.m. hours.

Fairfax County in Virginia plans to implement a later school start time for the 2015-2016 school year. In a video statement on the Fairfax County's Public Schools cable channel, Superintendent Karen Garza said that the school board was prompted to reevaluate school start times after reviewing "compelling scientific evidence" supporting such a move for teens. The school board provided the community with a number of proposed revisions to the schedule, ultimately deciding all high schools will start between 8 and 8:10 a.m.

"Because we are such a large and diverse district, these changes will be easier for some parents and more challenging for others," Garza said in the video statement, "but in the end our goal is to improve our students' safety, health and academic performance."
at 6:14 AM