"...if we insist on prizing the result more than the process, they’ll never learn that sometimes it’s worth it to shoot for the moon, even if you don’t get there." 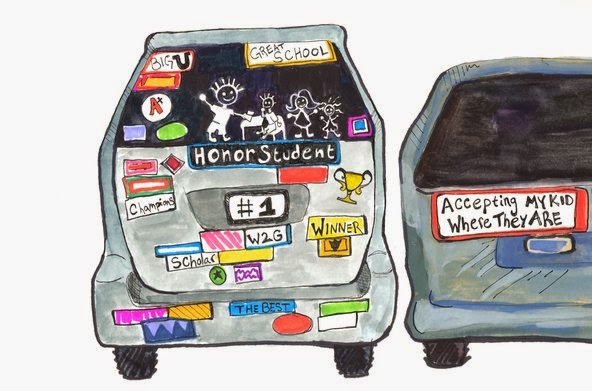 What do we mean when we say we want to raise “successful” children? Too often, especially around this time of year, that conversation centers on college or the kinds of academics and activities that lead to college.

“Success” is hard to measure, and those external markers make for comforting milestones along the way.

Comforting, but dangerous. Because when checking off the achievement box is what defines success, it’s too easy to forget that it’s the qualities in our children that might lead to those accomplishments that matter — not the goals themselves.

Achievements, from the A on the science project to the letter of acceptance from Big U, can be the gold stars for parents. They’re the visible signs that we’re doing something right, and that makes it tempting to push our children forward, just a little (or maybe a lot) by stepping in when it looks as if they might not quite get there on their own. The working model of the water cycle was her idea; we just “helped” build it. She did the algebra homework; we just corrected it. He wrote the essay; we just added some structure to the argument.

Those “justs” can be killers, says pediatrician Kenneth Ginsburg, author of “Raising Kids to Thrive” (American Academy of Pediatrics). Because while we want to protect our children from harm, what we too often end up doing is protecting them from learning. That help creep gets in the way of our children experiencing the kind of results that teach lessons they need, like “I could have done better if I’d worked harder,” and, “you can’t leave things to the last minute and expect to do them well.”

It teaches them, instead, that their parents believe they are incapable of achieving anything worthwhile on their own.

“We should be thinking about the adult we’re raising from the day our children are born,” says Dr. Ginsburg, and that means looking past the goals immediately in front of them to the tenacious, resilient, empathetic, innovative person you hope they will become.

No one science project will teach all that, but it’s the cumulative effect of many projects — projects done well, projects done poorly, projects that were big dreams but out of reach and projects that turned out exactly as planned, whether they look that way to adult eyes or not — that builds up the muscles our children need as adults.

Letting things turn out poorly can be hard for parents, especially when it “matters.” We extrapolate and catastrophize. Too much poorly done math homework will mean my second grader never gets to calculus. A poor showing at the audition he is not practicing for means he will never get another chance at the state orchestra.

It takes so long for children to learn the lessons we think they should learn when things go awry — what if by the time they’ve learned to do better, it’s too late for whatever we had in mind?

When we parents catch ourselves thinking that way, we need a goal reset. Dr. Ginsburg’s metaphor for the parenting style that lets children experience their own successes and failures is “lighthouse parenting.” “I want to be a model for my child, a stable force that they can always see,” he says. “I want to make sure that they don’t crash against the rocks, but I have to make sure that they can ride the waves on their own.”

It’s distinguishing between a crash and a rough wave that’s hard. “How do you protect and let them learn? It’s a hard line to toe,” he says, especially as children get older and their decisions begin to have longer-term consequences. It’s easier to let a fifth grader fail a test she didn’t study for than it is to look the other way when the same thing happens to a high school junior, and on specific questions like that, there’s “no prescription that applies to every kid,” he says.

Parents, he suggests, should focus on giving children navigational skills. Instead of talking to a teacher about how a child could improve a grade, send the child in herself, but help her practice what to say. Don’t nag endlessly about homework, but help create a study or project timetable that would make it possible to get it all done. When the cardboard water cycle model fails to hold water, help her think of the best way to present her now-soggy project without it, congratulate her on thinking big, and remind her that not everything works perfectly the first time.

Raising a successful adult means letting a child be a child, with all the mistakes and consequences and learning that come with childhood. If we cover up our children’s best work with ours, they learn that their best isn’t good enough. If we cover up their weak efforts with our willingness to do more, then they’ll never learn that more is worth doing. If we prop up their procrastination with our ability to nag and cajole, they’ll never learn to discipline themselves.

And, if we insist on prizing the result more than the process, they’ll never learn that sometimes it’s worth it to shoot for the moon, even if you don’t get there.
at 7:49 AM