Tips for explaining autism to family and close friends, to help them become effective allies.

If your child has been newly diagnosed with autism, one thing that can be a challenge is telling your parents and extended family.

Autism is something that more and more people are aware of, but there's still a lot of misinformation. Your family members might not know what it means, or they might have a limited or skewed understanding of what it looks like. They might have a stereotype of what autism is that doesn't fit your child.

They also may have an understandable, if misguided, urge to resist the diagnosis. It's not unusual to be told by your relatives that you are overreacting, or that it's a mistake to give everyone who's a little different a diagnosis.

But if you've gone through the process of getting your child evaluated, it's because he is pretty clearly not developing in typical ways, or, if he's older, he is struggling and impaired in some important ways. The problems he's having may not be visible to everyone in your family. But you need the people you are close to as allies in helping your child. So getting them on your team is worth the effort. 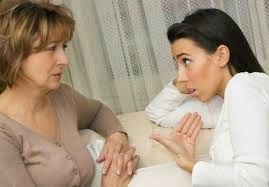 It's a conversation that might be difficult or emotional, so here are some tips:

Using behaviors they might have noticed is one way to start explaining what autism is, and why your child was diagnosed.

For example, if your child doesn't make eye contact and has a hard time connecting with other kids, you can explain that it's not that he's shy and he isn't being rude—those are symptoms of his autism. Likewise, if he melts down when visiting family, it might be because he has a very hard time handling changes in routine—another thing common for autistic kids.

"If they understand that it's something different about your child, and it's not intentional, then that can be a springboard for a bigger discussion about what autism is," says Child Mind Institute neuropsychologist Michael Rosenthal.

Let them know that behaviors associated with autism are divided into two groups:

They may ask what causes autism.

Here are the main things you want to cover:

Your child may not fit their image of autism.


Explain that autism is a spectrum of behaviors, and every autistic person is different in terms of onset, severity, and types of symptoms. For instance, some are nonverbal, and some are hyper verbal—they talk your ear off, though they don't engage in the back-and-forth of conversation very well.

Child Mind Institute psychologist Mandi Silverman notes, "We often say that children with autism are like snowflakes, no two are the same. Just because one child with autism looks and sounds one way does not mean that another child will."

Explain how the diagnosis will help your child.

People often worry that having a diagnosis will negatively "label" a child, making people think she's weird and hurting her opportunities and her self-esteem. In fact the opposite is often true. It can be a relief to know that a child's struggles (and strengths) have a name and are actually pretty well understood and not that unusual.

Having a diagnosis also means that your family is eligible for therapies and services, which can be transformative.

Family members can have different reactions to hearing about a child's diagnosis. Sometimes it's a relief because there's an explanation for the things that are challenging. Relatives might also feel sad or overwhelmed. It's normal to experience a range of emotions. They might also reject the diagnosis, which can leave you feeling very hurt and isolated.

"Initially receiving a diagnosis is a very big event. Sometimes hearing a diagnosis challenges parents' perceptions of what they envisioned parenthood would be," says Dr. Silverman. This is also true for grandparents. "Sometimes relatives, like parents, need to take some extra time to put the pieces together. Frustration or confusion or anger—they are not uncommon. Sometimes we need time to process it," she says.

Let your family members express their feelings, but also tell them that you're working with a team of providers to do what's best for your child. You can also say that they are important to you and your child, so you hope they will be supportive.

Use your doctor if necessary.

If family members' reactions don't seem to be improving, Dr. Rosenthal recommends thinking about why they might be resistant. He says three common reasons are:

"I've had situations where I've encouraged parents to have their extended family come in if that person was having trouble coping or understanding what was happening," he says.

"Psychoeducation can be helpful for everyone no matter what. If people have really big misconceptions about the diagnosis or are feeling helpless, this is an opportunity to educate them."

Dr. Rosenthal also notes that if you are currently going through the evaluation process, it can be a good idea to have your relatives come in for the feedback.

Dr. Silverman suggests that parents download the 100 Day Kit from Autism Speaks, which also has tips specifically for grandparents, brothers and sisters, and extended family members.

"I tell people to download this kit and then go on a 30 day internet fast," says Dr. Silverman. "Stay off of it. The great thing about the internet is that it gives us so much information, and the bad thing is that anybody who has an idea can write something and it can be toxic or incorrect. "

Ask people for help (and be specific!).

This can actually be a relief for you and the people you're asking because it's in our nature to want to help family and friends, but sometimes people don't because they aren't sure how or are afraid they might be overstepping. So if you want help, say it.

Talk with other parents.

Parents making sense of a new diagnosis can sometimes feel overwhelmed and alone. Dr. Silverman says that one of the most important things, besides getting good treatment, is spending time with other special needs parents. "Being in the company of other parents can make you feel strong rather than alone and isolated. It's important to have people who get it," she says. "They can say, 'Someone said that to me too, and it's so frustrating because that's not the way it is.' "

Your child's doctor might be able to recommend a local support group, or you could look online or network with other parents at special needs sports or activity groups.
at 8:08 AM