Study of 95,727 Kids Re-Confirms that MMR Vaccine Not Linked to Autism

From Reuters Health
via the HuffPost Healthy Living Blog

The measles, mumps and rubella (MMR) vaccine is not linked to development of autism spectrum disorders, even among children considered to be at risk, a large new study finds. 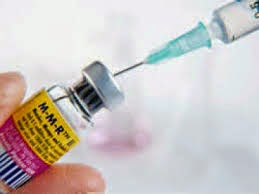 Among nearly 100,000 children, receipt of the MMR vaccine did not increase the risk for autism spectrum disorder (ASD), regardless of whether kids were at higher risk because an older sibling already had the condition, researchers write in JAMA.

"Even for children who are high-risk, the vaccine does not play a role," said lead author Dr. Anjali Jain of healthcare consulting firm The Lewin Group in Falls Church, Virginia. "We don't know what does unfortunately, but it's not the MMR vaccine."

The results should be reassuring, she said.

Autism Spectrum Disorder is a range of symptoms that often includes difficulties with communication and social interaction, according to the U.S. National Institute of Mental Health. It's may also include restricted and repetitive behaviors.

The 1998 study that claimed to find a connection between the MMR vaccine and ASD was later debunked. The Lancet, the medical journal that originally published it, withdrew it. Studies continue to vouch for the safety of the vaccine.

Still, some people continue to believe that the vaccine is connected to ASD.

Parents of children with ASD may also believe there is a genetic component, and so they decline to vaccinate their other children, Jain and colleagues noted in their report in the Journal of the American Medical Association.

For the new study, the researchers used insurance claims data on 95,727 children followed from birth to at least age five between 2001 and 2012. They also had data on the children's older siblings.

Overall, about 2 percent of the children had an older sibling with ASD. Those children were more likely to go on to develop ASD themselves whether they were vaccinated or not, according to the report.

The vaccine didn't increase their risk, the researchers say.

Furthermore, children with an older sibling with ASD were significantly less likely to have received the MMR vaccine in the first place.

By age five, about 92 percent of the children without ASD in the family had received at least one MMR dose. By comparison, only 86 percent of children with an older sibling with ASD had been vaccinated by that age.

"I think it's important to show that the degree of undervaccination in the families with children with autism spectrum disorder was significant," Jain told Reuters Health.

Alongside the lack of association between the vaccine and ASD, the undervaccination rate deserves attention, she said.

Roughly a dozen studies have shown that age of ASD onset and its severity do not differ between vaccinated and unvaccinated children, wrote Dr. Bryan King, program director of the Autism Center at Seattle Children's Hospital, in an editorial accompanying the new study.

The new study, King added, now shows that "the risk of ASD recurrence in families does not differ between vaccinated and unvaccinated children."

Abstract of the Study

IMPORTANCE:
Despite research showing no link between the measles-mumps-rubella (MMR) vaccine and autism spectrum disorders (ASD), beliefs that the vaccine causes autism persist, leading to lower vaccination levels. Parents who already have a child with ASD may be especially wary of vaccinations.

OBJECTIVE:
To report ASD occurrence by MMR vaccine status in a large sample of US children who have older siblings with and without ASD.

DESIGN, SETTING, AND PARTICIPANTS:
A retrospective cohort study using an administrative claims database associated with a large commercial health plan. Participants included children continuously enrolled in the health plan from birth to at least 5 years of age during 2001-2012 who also had an older sibling continuously enrolled for at least 6 months between 1997 and 2012.

CONCLUSIONS AND RELEVANCE:
In this large sample of privately insured children with older siblings, receipt of the MMR vaccine was not associated with increased risk of ASD, regardless of whether older siblings had ASD. These findings indicate no harmful association between MMR vaccine receipt and ASD even among children already at higher risk for ASD.
at 6:39 AM