Let the Kids Learn Through Play

Twenty years ago, kids in preschool, kindergarten and even first and second grade spent much of their time playing: building with blocks, drawing or creating imaginary worlds, in their own heads or with classmates.

But increasingly, these activities are being abandoned for the teacher-led, didactic instruction typically used in higher grades. 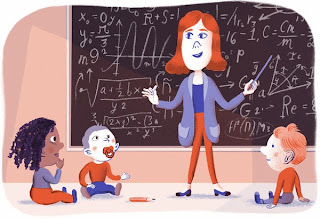 In many schools, formal education starts at age 4 or 5. Without this early start, the thinking goes, kids risk falling behind in crucial subjects such as reading and math, and may never catch up.

But a growing group of scientists, education researchers and educators say there is little evidence that this approach improves long-term achievement; in fact, it may have the opposite effect, potentially slowing emotional and cognitive development, causing unnecessary stress and perhaps even souring kids’ desire to learn.

One expert I talked to recently, Nancy Carlsson-Paige, a professor emerita of education at Lesley University in Cambridge, MA, describes this trend as a “profound misunderstanding of how children learn.” She regularly tours schools, and sees younger students floundering to comprehend instruction:

“I’ve seen it many, many times in many, many classrooms — kids being told to sit at a table and just copy letters. They don’t know what they’re doing. It’s heartbreaking.”

The stakes in this debate are considerable. As the skeptics of teacher-led early learning see it, that kind of education will fail to produce people who can discover and innovate, and will merely produce people who are likely to be passive consumers of information, followers rather than inventors. Which kind of citizen do we want for the 21st century?

In the United States, more academic early education has spread rapidly in the past decade. Programs like No Child Left Behind and Race to the Top have contributed to more testing and more teacher-directed instruction.

Another reason: the Common Core State Standards, a detailed set of educational guidelines meant to ensure that students reach certain benchmarks between kindergarten and 12th grade. Currently, 43 states and the District of Columbia have adopted both the math and language standards.

The shift toward didactic approaches is an attempt to solve two pressing problems.

By many measures, American educational achievement lags behind that of other countries; at the same time, millions of American students, many poor and from minority backgrounds, remain far below national norms. Advocates say that starting formal education earlier will help close these dual gaps.

But these moves, while well intentioned, are misguided. Several countries, including Finland and Estonia, don’t start compulsory education until the age of 7. In the most recent comparison of national educational levels, the Program for International Student Assessment, both countries ranked significantly higher than the United States on math, science and reading.

Of course, these countries are smaller, less unequal and less diverse than the United States. In such circumstances, education poses fewer challenges. It’s unlikely that starting school at 7 would work here: too many young kids, disadvantaged or otherwise, would probably end up watching hours of TV a day, not an activity that promotes future educational achievement.

But the complexities of the task in this country don’t erase a fundamental fact that overly structured classrooms do not benefit many young children.

Some research indicates that early instruction in reading and other areas may help some students, but these boosts appear to be temporary. A 2009 study by Sebastian P. Suggate, an education researcher at Alanus University in Germany, looked at about 400,000 15-year-olds in more than 50 countries and found that early school entry provided no advantage.

Another study by Dr. Suggate, published in 2012, looked at a group of 83 students over several years and found that those who started at age five had lower reading comprehension than those who began learning later.

Other research has found that early didactic instruction might actually worsen academic performance. Rebecca A. Marcon, a psychology professor at the University of North Florida, studied 343 children who had attended a preschool class that was “academically oriented,” one that encouraged “child initiated” learning, or one in between.

She looked at the students’ performance several years later, in third and fourth grade, and found that by the end of the fourth grade those who had received more didactic instruction earned significantly lower grades than those who had been allowed more opportunities to learn through play.

Children’s progress “may have been slowed by overly academic preschool experiences that introduced formalized learning experiences too early for most children’s developmental status,” Dr. Marcon wrote. Nevertheless, many educators want to curtail play during school.

“Play is often perceived as immature behavior that doesn’t achieve anything,” says David Whitebread, a psychologist at Cambridge University who has studied the topic for decades. “But it’s essential to development. They need to learn to persevere, to control attention, to control emotions. Kids learn these things through playing.”

Over the past 20 years, scientists have come to understand much more about how children learn. Jay Giedd, a neuroscientist at the University of California, San Diego, has spent his career studying how the human brain develops from birth through adolescence; he says most kids younger than 7 or 8 are better suited for active exploration than didactic explanation. “The trouble with over-structuring is that it discourages exploration,” he says.

Reading, in particular, can’t be rushed. It has been around for only about 6,000 years, so the ability to transform marks on paper into complex meaning is not pre-wired into the brain. It doesn’t develop “naturally,” as do other complex skills such as walking; it can be fostered, but not forced. Too often that’s what schools are trying to do now.

This is not to suggest that we shouldn’t increase access to preschool, and improve early education for disadvantaged children. But the early education that kids get — whatever their socioeconomic background — should truly help their development. We must hope that those who make education policy will start paying attention to this science.

David Kohn is a freelance science writer based in Baltimore.
at 6:24 AM