What Should Define Autism: Deficits or Abilities?

“We’re very good at cataloging — sometimes in minute detail — all the things you can’t do,” he says. “We’ve not been very good about asking what you can do, or even want to do.” 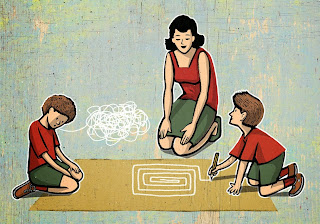 Consider two boys with autism. One, let’s call him John, can speak, announcing when he’s hungry or wants to play video games. But his brother, whom we’ll call Charles, is better at communicating even though he doesn’t talk: He adeptly engages others and conveys his feelings through facial expressions and eye contact.

Traditional autism assessments would peg John as the more able of the two because Charles is nonverbal. But in this case, it misrepresents the boys’ real abilities, says Peter Rosenbaum, professor of pediatrics at McMaster University in Canada.

Rosenbaum says focusing on Charles’ lack of language ability is akin to describing Rosenbaum himself, a white male, as a non-Asian non-woman. “We’re very good at cataloging — in minute detail — all the things you can’t do,” he says. “We’ve not been very good about asking what you can do, or even want to do.”

Two years ago, researchers studying intellectual disability officially shifted their focus in the direction Rosenbaum advocates. The current edition of the “Diagnostic and Statistical Manual of Mental Disorders,” the DSM-5, gauges the severity of intellectual disability by how well a person functions in daily life rather than on his intelligence quotient (IQ).

This change provides a template for a similar ‘ability framework’ in autism. Recognizing what those with autism can do turns people’s attention to encouraging and fostering these abilities, advocates say.

“Autism therapies are all about ridding the child of behaviors,” says Maureen Durkin, professor of population health sciences and pediatrics at the University of Wisconsin-Madison. “The disability perspective focuses just as much, or more, on what supports an individual needs.”

Charles eventually learned to type, for example, but he might never have been taught this skill if people had equated his nonverbal status with an inability to communicate.

Rosenbaum pioneered this can-do approach for cerebral palsy. In 1995, he developed a motor abilities scale that focuses on what actions children can perform rather than how they perform them (1, 2).

“If you can get around well, the fact that you do it awkwardly doesn’t interest me,” says Rosenbaum, whose scale is now used worldwide. “‘Normal’ is an increasingly stupid idea.”

The measurement method benefits children. If a child with cerebral palsy can only walk on a flat surface, then fixing the floor may be a better approach than ‘fixing’ the child, Rosenbaum says. “We can change the environment. Sometimes the simple things we do can make a huge difference functionally.”

In the case of intellectual disability, a low IQ is still required for a diagnosis, but the severity of the disorder is based on ‘adaptive behavior’ — a measure of a person’s ability to function in daily life. IQ tests may fail to accurately reflect people’s abilities in the real world, says Walter Kaufmann, director of the Rett Syndrome Program at Boston Children’s Hospital and a member of the DSM-5 committee that helped draft diagnostic criteria for neurodevelopmental disorders.

Rosenbaum and his colleagues are developing an ability scale for measuring how well children with autism communicate in social situations. A child with a low score on their scale might speak only when spoken to and never initiate a conversation. By contrast, children with the highest ability may seem eccentric, but are fully engaged when interacting with others.

Charles’ mother was always convinced he was better at communicating than his brother. Traditional assessments never supported her instincts, but Rosenbaum’s scale does.

Rosenbaum says he intends the scale as a way of assessing the abilities of children already diagnosed with autism. But this assessment might be tough to sell as an official part of the diagnosis.

The DSM-5 rates autism severity by the level of support an individual needs, not by ability. This emphasis is practical: Many people with autism function well because of the help they receive. But if these individuals were classified as ‘mild,’ because of the skills they possess, they could lose the very services that allow them to function, says Catherine Lord, director of the Center for Autism and the Developing Brain in New York City and also a member of the DSM-5 committee.

For this reason among others, “translating the ability framework that we have in intellectual disability to autism is a little premature,” Kaufmann says.