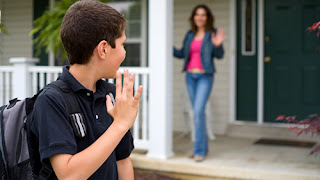 This generation of parents of young kids has, I think wisely, discovered that being very present as a parent is important to really nurture a child. But this generation has also—as it does in so many other endeavors—taken active parenting to new competitive heights.

And, we are a society that tends to subscribe to the idea that if something is good, then more of it must be better. And that's where the idea of the helicopter parent comes in, because in fact more isn't always better.

The Benefits of Learning the Hard Way

A recent study from the University of Buffalo speaks to the issue of whether too much hovering over a child can be bad for her. Researchers looked at people who had been through difficult things, and they found that, on the one hand, going through very traumatic experiences does not bode well for one's long-term resilience, but, on the other, going through almost no difficult experiences also does not bode well for one's resilience.

Having obstacles to overcome is what helps children to build resilience, to develop coping skills to deal with things that are difficult. As they get older, they're able to say, when facing a challenge, "Well, I got through that so I can probably get through this." Children need to learn through trial and error—this worked, this didn't work. This is something that that parents may have difficulty with, because of course they don't want to see their children suffer at all. But with no suffering, you build no skills.

Eventually an overprotected child will grow into an adult and face adult problems: "I'm having trouble getting a job." "I didn't get accepted to that program I wanted." "That guy didn't ask me to marry him."

Whatever it is, if you have no tools in your armory for coping with disappointment, for struggling and persevering, then you're in trouble. I think that kind of lack of resilience—the feeling of being overwhelmed as an adult and unable to cope—often ends in depression.

Another problem is that parents often want to sort of enjoy childhood all over again through the eyes of their kids. Again, I'm sympathetic—it's hard to resist—but when you blur the boundaries, because it's fun to sort of be a teen with your teenager, it can lead to over-identification.

You want to make it as enjoyable as possible for both of you: so you want to ensure that your daughter enjoys pleasures you were denied, and has successes that you didn't have the first time around. But when you become invested that way, you own it, you don't really let your children own their own accomplishments. So they don't end up feeling that whatever they did, they did. And again they're robbed of the feeling that they have the equipment to manage.

Wanting to protect a child from suffering is also the reason why some parents tend to be very poor disciplinarians. If you are very identified with your child then it's painful to discipline them because you are standing so much in their shoes that you feel like you are disciplining yourself. Hence all these parents who are sort of being the friend and not the parent.

But, you know, kids have got friends; they really need parents, and parents are the people who say, "No, and this is the consequence if you do the thing that I said you can't do."

Having parents who set limits enables kids to internalize their own moral compass. They learn to say to themselves some form of, "No, I really can't do that; that's my limit." And the flip side: "Oh, I did this thing wrong, now I feel guilty and bad, and I have to make reparations." If you didn't provide any of this kind of training, it's going to be harder for them to set limits for themselves.

And, finally, for parents who have invested heavily in excelling at parenting, who've made it a big part of their own self-image, there is the risk that if something doesn't go well for the child, it means you have failed. It's something to watch out for, as you try to do your best for your kids: you don't want them to be afraid of failure more for your sake than their own.

What builds confidence in kids is working hard at something and seeing that something real was accomplished—even if it is partially a failure. Confidence comes from making the effort, from persevering, from coping, and seeing the results.

So, as a parent you're better off praising the something that has more to do with those qualities of coping and managing something difficult than letting your kids know that just about everything they do is perfect story.
at 7:52 AM