And Now, Mandatory Summer School for Some Kindergartners

From The Washington Post's Education Blog

"We can’t continue to make school such drudgery for kids and then scratch our heads when they do poorly or fail." 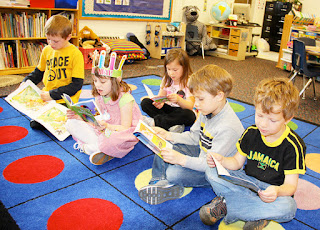 It isn’t enough, apparently, that many kindergartners today are subjected to test after test, homework, little or no play, little or no rest time, and sometimes, no snack. Now, a Florida school superintendent is recommending a new treat for kindergartners who are not reading as well as adults want them to be (even if they aren’t developmentally ready to): summer school. Where they can do even more academic work and get less time to be kids and play.

The Florida Times-Union writes in this story that Duval Superintendent Nikolai Vitti has urged the School Board to consider sending kindergartners — as well as first- and second-graders too — to summer school if they aren’t reading well enough.

As it turns out, half of the county’s third-graders don’t read on grade level, he said, which is a problem given that in Florida, third-graders who are not proficient enough in reading are held back a year, a practice that began years ago when Jeb Bush was governor from 1999-2007. The county, in fact, used to require that young students go to summer school if they did poorly on a reading test, but, that stopped in 2013 when he ditched the FAIR test, saying it wasn’t student or teacher friendly, the story said.

(Incidentally, the state of Florida in September, 2014 at least temporarily stopped using the FAIR testfor students in grades K-2 after a teacher publicly blasted the exam, saying it was inappropriate for very young students.)

“We’ve got to make sure our kids are reading at grade level. If our kids are better prepared at the primary level, then they’ll be prepared for third grade and beyond.”

Some board members were less than convinced, and discussion will continue. The Times-Union quoted one parent, Shamane Thomas, a Northside mother of three, who succinctly explained why putting kindergartners in summer school specifically for more reading instruction is a bad idea:

No, you can’t, although plenty of schools now try, given that curriculum has been pushed down so much that kindergarten is no longer a time for kids to learn and socialize through play but rather for a lot of desk time with academic assignments.

Sure, some schools break up the time so kids don’t sit there hour after hour, but the pressure on young children to learn to read and do math — even if they aren’t developmentally ready — and on teachers to ensure that they do learn — has become extraordinary.

Providing quality summer programs for young children is a laudable goal — and something school systems and city governments should offer. But requiring 5- and 6-year-olds to go to summer school so they can labor over academics is something else entirely. Some kids just aren’t ready to read at 5 years old. Forcing them to sit in summer school class sounding out words isn’t going to much help.

Chip Wood is the author of the seminal “Yardsticks: Children in the Classroom Ages 4-14,” which says that 5-year-olds are active and receptive, take things in through their senses, and love to play. In fact, he wrote, play “is the five-year-old’s primary occupation.” Just not in kindergarten today.

As for 6-year-olds, Wood wrote that they “take on every activity, at home and at school, with unbridled enthusiasm,” “love jokes, silly songs, and guessing games,” and “love to be outdoors.” Not much time for that in many kindergartens today.

Duval certainly wouldn’t be the first school district to require very young students to go to summer school if they aren’t reading and computing well enough for the grown-ups. In 2014, for example, the Middletown school district in New York’s Lower Hudson Valley required about 600 students from kindergarten through second grade to go to summer school for five weeks, according to the Journal News and lohud.com. They were chosen because their scores on a computer-based test called MAP were deemed insufficient to give them a relaxing summer.

The MAP, incidentally, is the same exam that sparked protests in 2013 by Seattle teachers who refused to give the test because they said it was a poor instrument for evaluation. The teachers won some concessions.

Back in 2012, the superintendent of schools in Hartford, Connecticut wanted to mandate that some kindergartners at the lowest-performing schools attend school 11 months a year working on academics. This post quoted from a story in the Hartford Courant that said some kindergartners were already going to school from 7:45 a.m. to 2:45 p.m. — with no time for naps and no time to play. It quoted Immacula Didier, the principal at Betances Early Reading Lab School, as saying,:

For years now, we’ve been pushing down curriculum so that kindergarten is the new first grade and kids who can’t read by the time they leave are already considered behind. Maybe the answer isn’t forcing kids to go to summer school but to provide enriching summer activities that spark a child’s curiosity and creativity, allow them to learn to socialize with others, and then give them the time they need to read in a developmentally appropriate manner.

"School has become drudgery for kids and that has crept both into the younger grades and into the neighborhoods where the kids can least afford to hate school….I have no problem with kindergartners going to summer school if it is done right with lots of play and art activities sandwiched around learning blocks, unfortunately I don’t believe that is what the super has in mind. We can’t continue to make school such drudgery for kids and then scratch our heads when they do poorly or fail."
at 6:34 AM