From The Boston Globe

A study of more than 16,000 Boston-area high school students suggests cyberbullying is on the rise, most sharply with girls as victims and abetted by the prevalence of smartphones among teens. 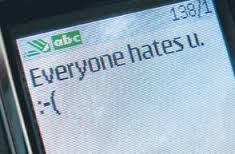 The percentage of the students who said they experienced cyberbullying jumped from 14.6 percent to 21.2 percent over a six-year period ending in 2012, according to the study by the nonprofit Education Development Center.

The percentage of girls reporting incidents involving bullying or harassment on forums such as websites and social networks shot up 10 percent, while incidents targeting boys increased 3 percent, according to the study. At the same time, reports of in-person bullying decreased by 3 percent over the period.

Specialists said the study, which will be published in September in the Journal of School Health, reflects the spread of technology that enables harassers to spread information quickly and often anonymously, and to target victims any time of the day.

“I am not surprised in the least that cyberbullying has gone up,” said Rusty Sullivan, the co-producer of the Boston vs. Bullies program, an antibullying program used in schools throughout Massachusetts. “Cellphones, the Internet, and everything that goes along with it is such a bigger part of kids’ lives today than it was 10 years ago.”

Increased cyberbullying “raises the stakes considerably” for bullying since the audience is virtually unlimited, Sullivan said. “Once the kid hits send, there’s no way to control it,” he said.

Shari Kessel Schneider, a project director at Waltham-based EDC and the lead author on the new study, agreed that the instantaneous nature of cellphones probably has contributed to the rise in cyberbullying. Websites that allow for anonymous posts, or messages that can disappear after they are sent, are also prime vehicles for dissemination, she said.

In 2010, Massachusetts passed a law heralded as one of the nation’s toughest antibullying statutes. It mandated antibullying training for faculty and students and required every school employee to report cases of bullying. Preventing cyberbullying, which is defined as “bullying through the use of technology or any electronic communication,” was a key element of the bill.

It takes only one embarrassing photograph to constitute cyberbullying, whereas in the past bullying often took a pattern of repeated behavior, said Gershon Ben Keren, head instructor at the Situation Effective Protection System program in Boston, which helps people predict, identify, and avoid violence.

The relative ease of cyberbullying may help explain its increase, Ben Keren said. Gone are the days when a child could walk home, close his or her bedroom door, and escape being bullied, he said.

The study collected survey answers from four different years, beginning in 2006. It was funded by the MetroWest Health Foundation. Because the surveyed students hailed from the suburbs west of Boston, the report cautions that results may not be generalizable to other regions.

But the findings are consistent with other research, said Elizabeth Englander, a professor of psychology at Bridgewater State University and director of the Massachusetts Aggression Reduction Center. She and other specialists said it is well known that cyberbullying disproportionately affects girls.

Girls tend to be more peer-focused than boys, and therefore more prone to forms of bullying such as exclusion and rumor spreading, said Jon Mattleman, director of Needham Youth Services.

“It tends to be very personal and very devastating,” said Mattleman, who called it “emotional, right to the core.”

The study also highlighted a reluctance by many youths to seek help. In 2012, only one-third of cyberbullying victims told an adult about their experiences. Girls were almost twice as likely to seek help than boys. When the teenagers did seek help, they more frequently sought someone outside of school.

Young adults are hesitant to involve parents because they think they will either overreact or take away their technology, Mattleman said.

Nonheterosexual teenagers reported higher instances of cyberbullying in the study. In 2012, 31.5 percent of youths who are members of sexual minorities — such as lesbian, gay, bisexual, or transsexual — reported being cyberbullied, compared with 20.3 percent of heterosexual youths.

“Even today, after marriage equality, they are still marginalized by their peers and in their schools,” said Emily Greytak, director of research at the Gay, Lesbian & Straight Education Network in Boston.

Greytak also noted the benefits of the Internet for LGBTQ youths, who go online for positive social support.
at 8:23 AM