Parents Know Pressure and Hovering Don’t Help Children Succeed. So Why Is It So Hard to Stop? 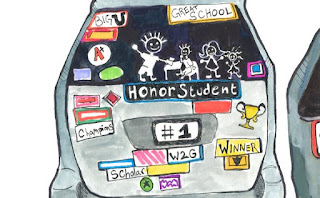 When Julie Scelfo set out to report Campus Suicide and the Pressure of Perfection, she expected to learn that today’s college students faced new and different stresses than their forebears. Instead, she found pieces of a familiar story.

“When I was reporting How to Say No to Your Kids: Settling Limits in an Age of Excess, (a Newsweek cover story she co-wrote in 2004), we found that psychologists were noticing an influx of adult patients who had experienced childhood ‘overindulgence,’ ” she said.

“And because these kids had never had a chance to experience failure and figure out how to recover, they turned into adults who lacked resiliency, felt anxious and weren’t able to manage basic work and relationship responsibilities.”

What really struck her, though, as she read a report issued by a University of Pennsylvania task force on mental health in the midst of a cluster of student suicides, was that so many students were not only suffering from those same old stressors, but were also unable to ask for help. “Why is it so hard for people to acknowledge when they’re suffering? Or said differently, why were kids continuing to hide their pain when help is readily available?”

Many students, she realized, had been pressured by their parents and their culture to define success in only a very narrow and specific way: not only do they need to be perfect in every academic, co-curricular and social endeavor, but that success must also appear effortless. Students must achieve, and look happy while they do it.

How much of that definition of success comes from a lifetime of parents pushing students forward and smoothing their way? Students who have learned that failure isn’t an option also don’t get the opportunity to learn that failure is surmountable, and haven’t had the opportunity to discover within themselves the resources to get back up and try again, or created a picture of their self-worth that isn’t reliant on outer success.

“When I heard students talk about what they needed to do and about the potential consequences of not getting a job, or not landing an internship,” Ms. Scelfo said in an email, “I realized they were overwrought — and that the concern was completely out of whack with reality (an insight echoed by an interview with a Penn doctor who described trying to talk some Wharton kids off the ledge about getting jobs during economic slow times).”

If some students, like Kathryn DeWitt, a University of Pennsylvania student who has battled depression and was profiled in the article, believed they saw failure looming, they couldn’t see beyond it.

Many of those students, including Ms. DeWitt, described childhoods that could have come out of any recent news media account about the combined dangers of over-parenting and pushing students toward parent-defined success. Here is how Ms. DeWitt described her high school years at home:

"Expectations were high. Every day at 5 p.m. test scores and updated grades were posted online. Her mother would be the first to comment should her grade go down. “I would get home from track and she would say, ‘I see your grade dropped.’ I would say, ‘Mom, I think it’s a mistake.’ And she would say, ‘That’s what I thought.’ ”

I don’t want to focus on Ms. DeWitt’s parents, who so graciously chose not to comment for the article (“We want to give Kathryn the opportunity to tell her own story.”) They surely never expected, when checking those grades the school helpfully posted nightly for parents and students alike, to someday become a public example of the negative affects of both high expectations and the tight monitoring of their daughter’s achieving them.

How likely is it that Ms. DeWitt’s parents, like so many of us, read books and articles like Madeline Levine’s “Teach Your Children Well;” Jessica Lahey’s Why Parents Need to Let Their Children Fail and so many more recent pieces on the need for parents to step back from their perfectionist tendencies and give their children the freedom they need to grow up? It’s a favorite topic across all media, and Motherlode posts on the dangers of overparenting and pushing are invariably among our most shared.

And yet the evidence, in the form of still more books and media on the topic, strongly suggests that while we read things like “A Cure for Hyper-Parenting” and “Push, Don’t Crush, the Students,” we may not actually be heeding their advice. Instead, we’re patting ourselves on the back and reassuring ourselves that we are not “that parent.”

“Don’t Make Your Children the Exception to Every Rule,” we tweet to our friends, but we’re worried about your child, not ours.

Is it possible that we have met the enemy, and he is us? It’s very easy to point the finger at other families. But as a psychologist recently told me in a very different context, one of the easiest ways to get at people’s internal biases — how we really think, feel and act — is to ask them to describe the biases of the people around them.

So maybe, as we post Campus Suicide and the Pressure of Perfection on our Facebook pages and share it within our communities, we should make sure to bcc the most important reader: ourselves.