Teens Aren't Getting Enough Sleep and Schools are Partly to Blame

From the HuffPost Healthy Living Blog

Across the country, only 17.7 percent of middle and high schools start classes after 8:30 a.m., contrary to 2014 recommendations from the American Academy of Pediatrics. Instead, the average school start time for middle and high schools around the country is 8:03 a.m., according to a new analysis from the Centers for Disease Control and Prevention.

The AAP recommends that schools start after 8:30 to help teens get 8.5 to 9.5 hours of sleep a night -- the amount the AAP says is ideal. Currently, less than a third of high school students sleep 8 hours a night, says the CDC analysis.

The analysis uses 2011-2012 information from the Department of Education to glean the start times of about 39,700 schools. Alaska has the latest average school start time at 8:33 a.m., while Louisiana has the earliest at 7:40 a.m. 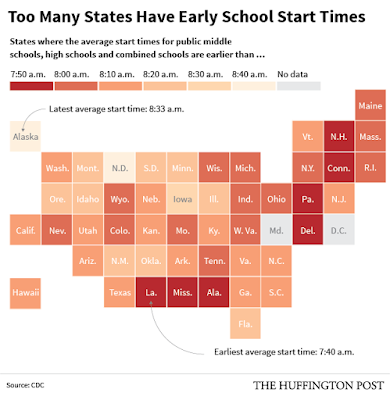 Sleep-deprived teens are more likely to suffer from depression, use drugs, get low grades and be overweight.

Even though schools often face obstacles when trying to delay school start times due to traffic and scheduling concerns, some have made progress recently.

After Deerfield Academy in Massachusetts delayed school start times in 2008 from 7:55 a.m. to 8:30 a.m., the private school saw a number of benefits.

A New Jersey bill is attempting to tackle the problem as well. Legislation currently awaiting Gov. Chris Christie's (R) signature would require the state to examine the effects of later school start times. Supporters of the New Jersey bill are hoping to explore the possible benefits to the state and its students.

"Resetting the school day would not be easy or simple, but given what we now know about the effects of sleep deprivation on the adolescent brain, to not even consider it as a possibility does our students a disservice," New Jersey Assemblywoman Mila Jasey (D) said in June.

Half of parents whose teens attend schools that start before 8:30 would support a later start time, according to a 2014 survey from the University of Michigan C.S. Mott Children's Hospital.
at 7:49 AM