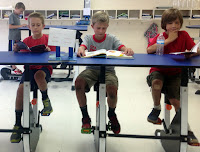 That’s been the mantra for legions of parents, teachers, and others trying to get children with ADHD to concentrate. But new research shows that not sitting still is exactly what those children need to do in order to learn.

According to a study at the University of Central Florida, children with hyperactive attention disorders perform better when moving. Foot-tapping, leg-swinging, chair-scooting, and all that other annoying squirming helps those children engage executive functions and stay alert.

As study author Mark Rapport explained in an article in UCF’s Colleges and Campus News:

“Typical interventions target reducing hyperactivity. It’s exactly the opposite of what we should be doing for a majority of kids with ADHD. The message isn’t ‘Let them run around the room,’ but you need to be able to facilitate their movement so they can maintain the level of alertness necessary for cognitive activities.”

What It Means for Kids with ADHD

The study involved 52 boys, ages 8-12 years old. Twenty-nine were diagnosed with ADHD; 23 showed normal development. Participants were given a number of tasks that gauge working memory, a key component for learning. A camera and observers recorded the children’s movements as they carried out the tasks.

The results showed that when children with ADHD moved the most, they performed better on the tasks. In contrast, the children without ADHD who moved most performed worse.

Although the study was small, it has important implications for how children with ADHD should be handled in learning and testing settings. According to the article,

“The study suggests that a majority of students with ADHD could perform better on classroom work, tests and homework if they’re sitting on activity balls or exercise bikes, for instance.”
at 8:45 AM