Why Do Kids Have Tantrums and Meltdowns? 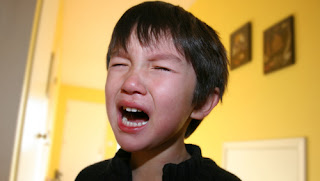 It will come as no surprise to parents that the problem which brings the most young children to the attention of a psychologist or psychiatrist is emotional outbursts—tantrums and meltdowns.


Indeed, these episodes are among the biggest challenges of parenting. They're hard to understand, hard to prevent, and even harder to respond to effectively when they're happening.

And, when they occur with frequency past the age in which they're developmentally expected—those terrible twos—they can become a big problem for the child, not just the beleaguered adults who endure them.

Many people make a distinction between tantrums and meltdowns, though neither is a clinical term. "Tantrum" is commonly used to describe milder outbursts, during which a child still retains some measure of control over his behavior. One benchmark many parents use is that a tantrum is likely to subside if no one is paying attention to it.

This is opposed to a meltdown, during which a child loses control so completely that the behavior only stops when he wears himself out and/or the parent is able to calm him down.

Whether mild or severe, tantrums are symptoms that a child is struggling with emotions she can't regulate. Anger, of course, is the No. 1 emotion that causes children to lose their heads and blow up—think of it as the kid version of road rage, says child and adolescent psychiatrist Steven Dickstein. The child feels she deserves or needs something that is being deliberately withheld from her—the cookie, the video game, something she covets at the toy store—and is overwhelmed by her frustration and sense of injustice.

But anxiety is another big trigger; it causes kids to freak out, overriding the logic that would enable her to see that her anxiety is out of proportion to the situation.

When children don't develop emotional regulation as part of normal development, the causes are varied. "The thing is, there's no such thing as tantrum disorder, or meltdown disorder," notes Dr. Dickstein. "Tantrums and meltdowns are like fevers—they can be triggered by so many different problems that we can't make them stop until we understand what's triggering them.

Sometimes the inability to regulate emotions is the result of an underlying problem. Some of the common causes of frequent meltdowns are:

Skills that May Be Lacking

Whatever the trigger, most mental health professionals believe that children who have frequent emotional outbursts are lacking certain skills that would help them better handle situations that cause them frustration, anxiety or anger.

A good deal of tantrum behavior that parents see as intentional or manipulative is much less voluntary than they realize, Dr. Dickstein notes. But that is not to say that it isn't learned behavior.

Kids with serious temper problems aren't consciously calculating throwing tantrums, but they may have learned, through reinforcement from adults, that tantrums get results. "There's no question that kids who haven't outgrown tantrums do have lagging skills in emotional regulation," says Dr. Lopes, "but then I think that weakness is maintained and exacerbated by conditioned learning."

If a child encounters a problem, doesn't know how else to handle it, and resorts to tantrums, he may well learn that, over time, this helps him get his way.

"It becomes a vicious cycle," says Dr. Lopes, "because instead of honing and practicing the adaptive skills that kids normally learn to solve problems collaboratively, these kids are learning maladaptive responses when they get frustrated. And by continuing to practice thoseskills, they are strengthening these behaviors over time and using them in a greater number of situations."

Whatever the cause, clinicians stress that in managing outbursts, the first step is understanding the triggers and testing ways the environment can be changed to reduce the incidence of outbursts. And when it comes to looking for ways to adjust a child's environment, parents are primary.

"We don't blame parents for tantrums," Dr. Dickstein says, "because parents are only part of what goes into a child's behavior patterns, along with temperament and development. But parent behavior is adjustable, so it's the most powerful tool we have for helping young children."
at 6:32 PM