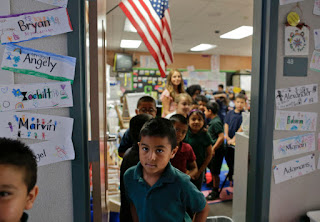 There’s little doubt that skills that can’t be measured by standardized tests still play a pretty big role in a student’s education.

Skills like self-confidence, the ability to work well with others, attitudes toward learning, and control over one’s emotions. Beyond making day-to-day life easier to navigate, these skills have long term effects in one’s life.

They’re associated with high school and college success, likelihood of future employment, higher earnings, positive health and smaller chances of incarceration. In fact, being proficient in those non-academic skills can result in impacts 40 years down the line, according to a report released Tuesday by Boston-based education nonprofit Transforming Education (TransformEd).

“The skills students need to become successful not just in school, but in their careers and their lives, include, very significantly, a set of skills that are not the focus of schools when [schools] only look at test scores,” said Christopher Gabrieli, TransformEd co-founder and chairman.

Gabrieli, a one-time gubernatorial candidate, is also co-founder of the National Center on Time & Learning and a major player in the expanded learning time movement. He says his work in expanding the school day raised a very specific question: What skills do students really need?

While there is mounting evidence from researchers of the importance of these non-cognitive skills, there are a number of challenges when it comes to deliberately teaching, learning and measuring them in schools.

Research and case studies that measure “soft skills” like self-control, openness to learning and teamwork show that mastery over these abilities can result in significant impacts in students’ lives.

Gabrieli says learning all of the skills are important, but finds some to have more profound lasting effects than others.

“Those measures of self-control have extraordinary predictive power over the lifetime of these students,” Gabrieli said. “[It’s a pretty] major deal, both for the person themselves and for society.”

Notably, studies also show that self-control is a better predictor of whether a student improves academically over a school year than a student’s IQ.

But self-control can change; it’s not static and, in many cases, it improves. So if we canteach students self-control, they’ll do better at school and in life, right?

While the Dunedin study doesn’t prove that an outside influence, like a school-based program, would effectively change a student’s self control, it shows that long-term benefits are in place when a student’s self-control does change.

“Saying to a kid who does well on a test ‘You’re smart’ is actually associated with negative developments versus praising a child, regardless of how they did, for where their effort shown,” Gabrieli said.

In a study cited in the report, the math grades of seventh graders with a so-called growth mindset increased over a two-year period, while those who believe intelligence is fixed stayed relatively flat. Other students who say they have a growth mindset are more likely to graduate than peers who don’t.

“When you look at all of that, you see these [skills] are really strongly validated,” said Gabrieli.

Validated or no, how do you measure these types of non-academic skills? How do we know how a student is doing with self-control or whether they have a growth mindset?

To answer this question, Gabrieli and TransformEd turned to surveys. And this past spring, 450,000 students in California school districts took them.

Still, TransformEd’s measure of students’ non-cognitive skills comes at a time when the national dialogue seems to be switching away from a focus on standardized academic testing toward embracing and supporting other measures of student success. Schools in all of Massachusetts’ so-called Gateway Cities now conduct classroom-based social-emotional learning programs each year.

And draft language from a new federal education bill would require all 50 states to add at least one non-academic measure to the mix when assessing schools.

“If we began to measure these things routinely, we could begin to identify where there are pockets of success above what you’d expect,” said Gabrieli. “There’s plenty of intervening already, it’d be nice to know which of that is working better than the others.