Tufts Research Says Owning a Pet is Good for Kids

Study: children who bond with animals are more confident and form better relationships. 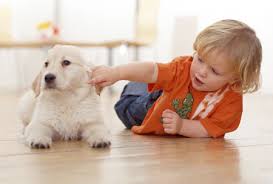 Did you beg your parents for a puppy growing up? Science says they probably should have listened to you.

Researchers at the Tufts Institute for Human-Animal Interaction (TIHAI) found that children tend to be “more confident and had stronger relationships with their families and peers” if they were close with an animal, according to a Tufts Now post.

TIHAI partnered with the Military Child Education Coalition to study how having animals in the house affected the stress and coping skills of 600 children.

The study was specifically intended to see if having pets helps children of deployed soldiers better cope with their parents’ absences—and the research suggests it does—but many findings held true for all children, military ties or not.

“Pets provide a nonjudgmental, emotionally supportive relationship, especially for kids who may be having difficulty in social situations or moving to a new social setting,” says researcher Megan Kiely Mueller in the post.

“The responsibility of caring for another living creature and understanding an animal’s needs also plays a role.”

Research has also shown that just stroking a pet’s coat may lower the owner’s blood pressure and heart rate.

This study is far from the first to show tangible health benefits tied to pet ownership, nor is it the only one in progress at Tufts.

Other scientists from TIHAI are examining how effective therapy dogs are in childhood oncology wards and at working with children with disabilities, and others are looking at how pet-assisted fitness regimens—like taking the dog for a walk every day, for example—could be used to combat childhood obesity.

Outside of Tufts, past research has shown that owning a dog lowers rates of cardiovascular disease, in large part because dog owners tend to be more active than their pet-less peers.

The moral of the story? Give Fido an extra bone tonight. He deserves it.
at 8:59 AM