Why Kindergarten is the New First Grade 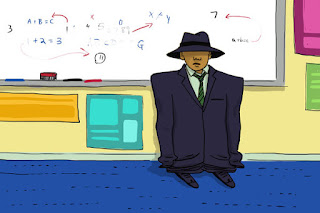 "What are some of the things that the monsters like to eat in this story?" teacher Marisa McGee asks a trio of girls sitting at her table.

McGee teaches kindergarten at Walker Jones Elementary in Washington, D.C. Today's lesson: a close reading of the book What Do Monsters Eat?

"I noticed you answered in a complete sentence," McGee says. "Can you tell me something else?"

McGee follows with a line you might not expect in a kindergarten class: "Can you show me the page where you found that?"

Textual evidence. Complete sentences. Welcome to kindergarten in 2016. It's not quite what McGee, 29, says she was expecting when she started.

"When I came into kindergarten, down from first grade, I was like: Yes! What can I order for dramatic play?" McGee says. "And I was told: Kindergartners don't do dramatic play anymore."

If you have young kids in school, or talk with teachers of young children, you've likely heard the refrain — that something's changed in the early grades. Schools seem to expect more of their youngest students academically, while giving them less time to spend in self-directed and creative play.

Their answers can tell us a lot about what they believe and expect of their students and what they actually do in their classrooms.

The authors chose to compare teachers' responses from two years, 1998 and 2010. Why 1998? Because the federal No Child Left Behind law hadn't yet changed the school landscape with its annual tests and emphasis on the achievement gap.

With the caveat that this is a sample, not a comprehensive survey, here's what they found. Among the differences:

Bassok was surprised by her results. "We went into the study seeing a lot of anecdotal evidence" about the ratcheting up of expectations in kindergarten, she says. "I thought part of this was a nostalgia for what we imagined kindergarten may have been. It's pretty amazing to me that, over a 12-year period, we see such drastic changes in teachers reporting what they expect and how they spend their time."

But what do these findings mean? And are they inherently bad?

Sonja Santelises, vice president for K-12 policy and practice at the Education Trust, which focuses on efforts to reduce the achievement gap, says rising expectations are a good thing, though "rigid instruction" is not.

"The report clearly raises important questions about how we are teaching our youngest learners," Santelises says. "But we need to be careful that we're not conflating the challenge of high-quality, engaging instruction and the actual target of learning to read."

Bassok agrees. "The changes that seem potentially troubling are more around how kids are learning, not what kids should be learning," she says. "There are classrooms that are very hands-on and allow kids to explore and also have terrific focus on math and are language-rich. Those things don't need to be at odds at all."

It's easy to make this a story about teachers' responses to high-stakes testing. Especially when you consider that, for every one of these indicators, the trend was even stronger in high-poverty classrooms and in schools with more nonwhite children — schools that no doubt felt accountability pressure under NCLB.

However, the authors caution that there are lots of factors at play here. Since 1998, the number of children attending public preschool has jumped dramatically. There's been an even bigger leap in students attending full-day versus half-day kindergarten, which gives teachers more time to cover every subject.

Parents also appear to be spending more time reading to kids and otherwise introducing language and math. In short, it's possible teachers' academic expectations have risen, at least in part, because more kids are coming to kindergarten better prepared.

Also, kindergartners are older than they used to be: 1 in 5 is 6 years old, in part due to the practice of "redshirting."

It should be said: The data in this study are five years old. It doesn't capture changes that may have taken place in schools since the adoption of the Common Core, for example. Kindergarten changed dramatically in just over a decade; as policies continue to shift, so too could practice. For now, it's less pretend time and more reading for the kids at Walker Jones Elementary.
at 7:37 AM