From Parents Have the Power
to Make Special Education Work 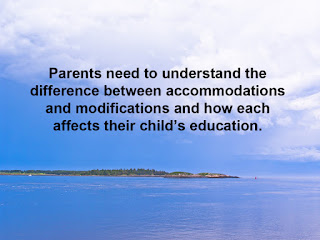 Of all the terms in special education, two of the most confusing for parents are “accommodation” and “modification.” We always saw these terms on our son’s IEP and, like most parents, never fully understood what they meant.

This is unfortunate, because knowing the difference can have a significant impact on a child’s education.

Both accommodations and modifications function together in a student’s IEP or 504 plan, but you need to understand how they affect your child’s curriculum and academic progress.

What is an Accommodation?

An accommodation is something that changes how a student learns, but doesn’t change the instruction itself.

For example, an accommodation might mean that a student is seated at the front of a classroom to compensate for a hearing or vision deficit, but the student participates in the same curriculum as the rest of the class.

Or, a student might be given extra time on tests to accommodate an executive function disorder, but the teacher still expects him or her to answer the same questions as all the other students.

Accommodations can also include the use of an assistive device, such as a specialized chair or desk, a computer, or a pencil grip. The curriculum remains the same as for the other students in the class, so teachers should have high expectations that a child with accommodations will be able to learn the material.

What is a Modification?

A modification changes what a student is expected to learn. Modifications alter the curriculum or the instruction for a student with disabilities.

For example, the student might be given easier questions on a test or shorter and simpler reading assignments. In general, a student who receives modifications is not held to the same standards as his or her general education peers.

Other examples of modifications might be for a student with a math disability to do fifth-grade math in a seventh-grade math class. Or, a student might be required to know half the words on a spelling test that the other students are learning.

One important aspect of modifications is that they should be, in the words of a recent U.S. Department of Education advisory letter, “aligned with State academic content standards for the grade in which a child is enrolled… so that the child can advance appropriately toward attaining those goals during the annual period covered by the IEP."

The letter also reminds IEP Teams to create goals that are “ambitious but achievable” and to estimate how much progress toward reaching grade level that the student will make.*

In other words, modifications should not “dumb down” the curriculum so that a student can appear to be successful without actually making meaningful and effective academic progress.

Our Experience with Modifications

As we write in our book, our son has a language-based learning disability that affects his reading and written composition. By the time he became a fluent reader in the fourth grade, he was behind in his writing ability. After all, if you can’t read, you can’t write. By the time he reached middle school, the academic demands were much greater than in elementary school.

Our school kept telling us that his writing problems were due to fine motor deficits, not a learning disability, despite independent testing that clearly showed the disability. Testing also showed that he was reading and comprehending at a college level, but his written composition was well below grade level.

Instead of giving him appropriate instruction, however, the school’s solution was to have him write as little as possible. In middle school, we began to get progress reports that indicated he had been “excused” from his written assignments.

It was clear that the school was modifying his curriculum rather than trying to teach him how to write. There was no attempt to have him make progress toward writing at grade level.

This was without ever having discussed writing modifications in our IEP meetings.

When confronted about this, the district’s director of special education proposed a formal modification for our son’s IEP that would excuse him from ever writing more than a single paragraph. After all, she continued, once he graduated from high school he could choose a college major in a subject that didn’t require any writing. Then, when he graduated from college, he could apply for jobs that didn’t involve having to write. In her mind, the solution was that simple.

Interestingly, when he did eventually attend college, he majored in English literature and Classical languages, both of which require a great deal of writing.

Accommodations and Modifications Can Alter Expectations

Based on our experience, we want parents to be vigilant and pay attention to how accommodations and modifications can affect the school’s expectations for their child.

We came to realize that “excusing” assignments was a modification and not an accommodation, one that made no attempt to allow our son to advance toward his grade level of writing ability.

Such a modification was not part of our son’s IEP, and it was inappropriate for a student who had the ability to do the assignments with the proper instruction and accommodations.

Modifications can be appropriate in certain circumstances but they are no substitute for proper and effective accommodations designed to help a student learn. Improperly used modifications can lower a teacher’s expectations for what a student can do, something we discuss in a previous blog article, The Problem With Low Expectations.

This article documents how certain school systems around the country misuse modifications to make the schools look better on standardized tests than they would have otherwise, and to reinforce low expectations and stereotypes for students with special needs.

Your Child’s IEP Must Clearly Specify the Difference

When discussing accommodations and modifications with your child’s IEP Team, we recommend that you:

Schools are required by law to use appropriate accommodations and modifications for children in special education, but it is unfortunately your responsibility to see it is done correctly.
at 7:03 AM