Students Who Lose Recess Are the Ones Who Need It Most

Despite overwhelming evidence that periods of unstructured play and social interaction are a crucial part of children’s cognitive, academic, physical and mental wellness, schools continue to take away recess privileges as a penalty for academic or behavioral transgressions. 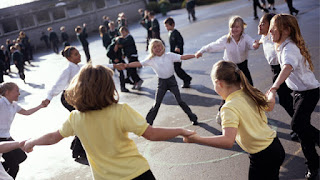 I’ve done it, many times. When students fail to hand in assignments or when a child acts up in class, I’ve taken their recess privileges hostage. I did it both as a way of punishing for bad behavior or as a way to carve out a few extra minutes of learning time in an otherwise packed day.

Unfortunately, I’m not alone. According to a Gallup poll commissioned by the Robert Wood Johnson Foundation, 77 percent of school principals report that they withhold recess as punishment, even as they simultaneously sing the praises of recess as a factor in academic, cognitive, and social development.

In that same report, eight in 10 principals acknowledge that time to play has a “positive impact on achievement,” and two-thirds of principals state that “students listen better after recess and are more focused in class.”

In response to this common disciplinary practice, as well as the overall declining rates and duration of recess in this country, the American Academy of Pediatrics recently issued a policy statement, “The Crucial Role of Recess,” to set the record straight and make recommendations to schools.

Their stance is unequivocal: “Recess offers cognitive, social, emotional, and physical benefits that may not be fully appreciated when a decision is made to diminish it.”

In other words, schools should keep recess on the schedule, and teachers like me shouldn’t take it away.

The physical benefits of recess to all students, particularly the 17 percent of American children who are classified as obese, are clear. In our increasingly sedentary society, it can be a challenge to ensure that children get the recommended 60 minutes of moderate to vigorous physical activity every day, and recess can help bridge that gap.

Recess also plays an important role in the ability to maintain self-control during class time. Self-control is not an unlimited resource, and by the time unstructured play rolls around, most children have depleted their reserves. They have had to resist the temptation to wiggle, eat the piece of cookie someone left on the carpet or talk to their friends in favor of focusing on math facts.

“Optimal cognitive processing in a child necessitates a period of interruption after a period of concentrated instruction. The benefits of these interruptions are best served by unstructured breaks rather than by merely shifting from one cognitive task to another.”

Several studies have found that students who enjoy the benefit of recess are more attentive, more productive and better able to learn when they return to the classroom from a period of free play.

Memory is also enhanced by breaks, because cognitive rest after learning new material allows that material to be retained for longer periods of time. For optimal cognitive processing and memory consolidation, therefore, children need a period of unstructured free time, even if it is simply in the form of socializing or daydreaming.

Finally, recess helps young children develop social skills, such as negotiation, social dynamics, and the use of subtle verbal and non-verbal communication cues. As our children’s schedules become more regimented and structured, and free-play time retreats indoors in favor of video games over kick the can and stickball, recess is the only opportunity many children have to learn these skills.

When I asked Michele Borba, an educational psychologist and former teacher, about the implications of withholding students’ recreational time, she was adamant in her support of recess as an essential educational activity. “The highest correlation to school success is a kid sitting in a seat, focused and eager to learn, but kids who lose recess lose that, and a lot more.”

According to Ms. Borba, students who are kept in at recess stand to lose:

1.) Brain power. Instead of being refreshed and ready to learn, they are brain-drained, as they have lost out on the opportunity to regain the energy needed for focus.

2.) Connection with peers. Not only does the benched kid gain a reputation of being a “bad kid,” they lose out on the opportunities to practice social skills, make new friends and strengthen existing friendships.

3.) Relationship with teachers. When a teacher holds a student out of recess, she undermines her relationship with that student. Consequently, student will tune that teacher out just when she should be tuning in and learning.

4.) Opportunities to learn a different behavior. Being left out of recess “doesn’t help a child understand what she did wrong, and even more importantly, doesn’t help her learn how to make it right the next time. Without that instruction, she becomes a repeat offender, and a self-perpetuating cycle of bad behavior and punishment takes over.”

If we truly want our children to function at their academic, physical and mental best, teachers need to stop withholding recess, and schools need to protect it. Cutting into or taking away recess time is counter-intuitive and self-defeating.

When we deprive our children of the cognitive rest and physical activity they need to perform at their best, teachers undermine the very education we seek to impart.

And parents, if you see your child getting repeatedly “benched,” you might want to choose a tactful moment and suggest that another method of discipline might lead to more classroom success — or just click the little blue envelope, send this link to the school principal and suggest (nicely!) that it be passed along.
at 7:30 AM