Emily Kaplan is an elementary school teacher living in Boston. In this post, she writes about her experiences working at a no-excuses charter school, and raises the question about whether a relentless focus on academic achievement for even the youngest students is counterproductive.

This first appeared on the Edushyster blog of Jennifer Berkshire. 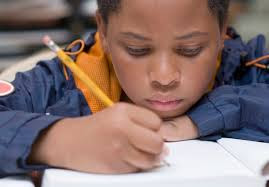 The very youngest children at the no-excuses charter school at which I taught all start their nine-hour school day in the same way: by reciting the school “creed.”

“I am a … scholar!” the 200 children chant. The principal weaves among the tables, making sure that the children “track” her by turning their heads in accordance with her movement. One child lets out a giggle. He is immediately sent to the Silent Area.

“I have the power to determine who I am, who I will become, and what I do in life.” They point their thumbs to their chests, extend their arms, and stack their fists in unison. “I will stay focused on achieving excellence.”

I notice that one of my second-grade students is wearing one neon green sock, in stark defiance of the dress code. I am contractually obligated to order him to take it off or to send him to the dean. I smile and look away.

“I will make smart choices because I care about myself, my teammates and my community.”

I turn my attention to the table of kindergartners next to me. They’re my favorite to watch, these tiny children who haven’t yet learned to be predictable.

Most mouth the words obediently: “Today is a step on my path toward success!” On cue, their little fists shoot into the air.

The principal smiles and returns to the front of the cafeteria. Ignoring the group of children sitting stone-faced in the Silent Area, she announces that we’re about to sing a catchy song about self-determination.

But I am giggling. The kindergartner next to me didn’t say “path to success.” He said “path to recess.”

Success in the Early Grades

This school is obsessed with success. Its students chant about it daily; its walls are plastered with banner-sized recipes in bold fonts and bright colors. And its proponents claim that, because it has the highest test scores in the state, it has achieved it.

These test scores don’t tell the whole story, of course, but they are also not meaningless. The school’s youngest students— children of color from predominantly low-income families— can do a lot. These 5-, 6-, and 7-year-olds who start each day by pumping their fists into the air while chanting about success are articulate in person and on the page; they are perspicacious readers and creative, rational mathematicians.

The nine hours a day they spend in classrooms named after four-year colleges— where every lesson is aligned to a standard and cut-out caterpillars with their names on them publicly climb the Reading Level Mountain—enable them to attain academic milestones earlier than their peers in more traditional school environments, where children [at least theoretically] spend six-hour school days engaged in less intense direct instruction and more play-based exploration.*

If the early attainment of academic skills—coupled with constant, explicit messaging about the necessity of pursuing long-term goals—were a primary determinant of long-term success, it stands to reason that the young children at this “no-excuses” school would continue, unobstructed and ahead of the curve, on their “path to success.” But they don’t.

Once children at this school reach adolescence, many struggle. Their high school entrance exam percentiles are far lower than those of their state standardized tests, and they are not admitted in large numbers to the most selective high schools. At the high schools they do attend, they struggle: in their first semester, 81% of last year’s 9th graders earned below a 3.0 grade point average.

Existing evidence indicates that these students— who have spent their entire educational careers, from kindergarten onward, in classrooms named after four-year colleges, striving toward big long-term goals like “excellence” and “success” — aren’t graduating from college in large numbers.

They aren’t excelling, and the extent to which they are even succeeding is debatable.

So why is this? Why do some children who learn to read earlier than their peers do so poorly in ways that matter later on? Why do children for whom every aspect of their education, from kindergarten onward, is tailored toward graduating from college often struggle to graduate from college?

Reflecting on my experiences teaching both at this school and at more traditional public schools, I find myself wondering if the methodology that enables young children to achieve so much so early actually hinders their long-term prospects. What if the struggles of graduates of “no excuses” schools reveal deficits that are not academic, but rather socio-emotional?

What would happen if, instead of spending nine hours a day engaged in academic tasks determined by a teacher, children were to spend a large portion of their day developing “soft skills” that would enable them to overcome the hurdles they will encounter when they’re older?

What if, like their suburban counterparts, they spent large portions of their day in rigorous, developmentally appropriate activities: learning to make friends, make art, and make believe, exploring and creating their interests and their identities?

That is, what if a necessary component of improving the long-term prospects of small children from disadvantaged backgrounds is not accelerating through childhood, but purposefully lingering in it?

The Case for Developmentally Appropriate Activities

To some, this approach might seem counter-intuitive: the earlier you board the train, say, the further you’ll go, and sooner. (Indeed, this type of reasoning seems to drive the leaders of the no-excuses school reform movement, who are seldom experts on childhood development.)

This type of “sooner, faster, further” thinking goes astray when applied to education, however, because child development is both non-linear and marked by largely immutable landmarks. (Just as the age at which developmentally normal babies learn to walk occurs within a span, countless studies have shown that the long-term academic abilities of a child who learns to read at six are no weaker than one who learns at four.)

Pushing children to attain academic skills they will attain regardless— while depriving them of other, more developmentally appropriate activities that would enable them to succeed independently when they are older— is short-sighted at best.

Implementing a more developmentally appropriate curriculum for young children might result in lower test scores in the short term, but I suspect that its long-term effects— both in terms of test scores and more relevant measures of success— would compensate.

(This solution, however, is admittedly incomplete; I suspect that in order to set children living in poverty on a true “path to success,” communities require resources and support that no school on its own is capable of providing.)

Maybe, though, letting small children linger in childhood would endow them with more of the real skills necessary to STAY FOCUSED ON ACHIEVING EXCELLENCE. Maybe, in the long run, it would better enable them to MAKE SMART CHOICES.

Maybe my little neighbor, who pumped his fist in the air as he conflated success with recess, was on to something.

*[1] Many argue that this is a pervasive problem in early childhood classrooms nationwide. The “no excuses” methodology is an extreme example of this approach, and I would argue that its consequences are proportionately severe.

Valerie Strauss covers education and runs The Answer Sheet.
at 7:49 AM