Are your mood swings and depression hurting your children in the classroom? 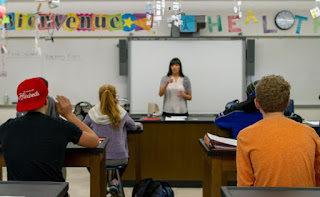 A new study that followed more than a million Swedish children and their parents suggests the answer may be “yes.”

The Drexel University study, published in the journal JAMA Psychiatry, found that depression in parents may negatively affect their children’s school performance.

Researchers used Sweden’s computerized health and population records, allowing them to analyze parents’ inpatient medical records from 1969 onward and outpatient records from 2001 onward, as well as education records for all children born in Sweden between 1984 to 1994.

Led by Hanyang Shen, a Drexel alumna, the study looked at how depression in parents at various stages of their children’s lives — before birth, after birth, at ages 1-5, 6-10 and 11-16 years, and anytime before the final year of school at age 16 — was connected to school performance.

Worryingly, maternal depression was more strongly associated with worse school performance for children than lower family income, which was linked to a grade decrease of 3.6 percent, researchers wrote.

Maternal depression seemed to have affected children’s grades the most at ages 11-16, with 5.1 percent lower grades in kids, while depression in fathers was most strongly associated with worse performance at ages 1-5, with a 4.1 percent decrease.

Conversely, depression in mothers had the smallest effect on kids’ academic achievements at ages 1-5, with only a 3.5 percent decrease in grades, while paternal depression was least associated with poor school performance right after birth, with a 2.3 percent decrease.

“Maternal depression episodes before birth and during child ages 6 to 10 and 11 to 16 years were more associated with school performance in girls than in boys,” researchers wrote in the study.

Asked what he thought was the most surprising finding, study author Brian Lee, associate professor of epidemiology and biostatistics at Drexel, said in a phone interview he did not expect to find such long-term effects of parental depression on kids’ academic performance.

“Looking at the associations with the child’s school grades at age 16, even if there’s a decade’s worth of difference between depression and when school grades were assessed, there’s still an association, which I think is pretty interesting,” Lee said.

Though Lee emphasizes that the study did not investigate the mechanisms through which parental depression might negatively affects child school performance, he says that the fact that even prenatal depression was linked to worse academic achievement in kids indicates that there may be a genetic aspect to the problem.

Genes causing depression in parents may be passed on to kids, and Lee says that depression in kids has long been associated with lower grades in school.

Another, potential reason, researchers suggest: A child’s awareness of a mental health problem in a parent could also cause the child to worry and possibly do worse in school.

Still, Lee wouldn’t comment on whether genetics or environment — nature or nurture — or both, might be the root cause for the children’s worse school performance because the study did not pursue this question.

It is important to note that the study did not find a causal relationship between depression and school performance, so there is no evidence yet that poor grades are a direct result of depression in parents.

Another limitation of the study is that depression is often underdiagnosed, so the true number of cases of depression in parents is likely much higher than what was found by the study, according to the paper.

Additionally, although researchers wrote that they were unable to ascertain whether children lived with both parents for the entire duration of the study, depression in a parent living apart from a child could still affect him/her because of genetic factors.

Lee said parents should “realize that the negative effects of mental health problems can extend to immediate family members and others close to them, especially children who are young and vulnerable.”

Lee said he would urge parents concerned about their mental health (and the well-being of their kids) to seek treatment.

Interestingly, Lee added that this type of study would not have happened in the U.S., “To do an equivalent study like this in the entirety of the U.S.” he said, “would be impossible due to how decentralized everything is.”
at 6:47 AM