From Parents Have the Power
to Make Special Education Work

"...All students in special education who receive services under IDEA are automatically protected by Section 504 (of the Rehabilitation Act of 1973)." 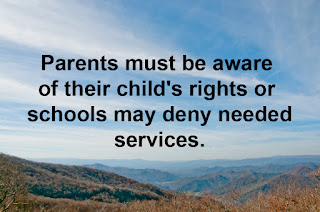 Schools sometimes rely on a parent being unaware of their child’s rights to deny services that might cost money or be inconvenient to provide, as illustrated by a case that occurred in 2013 in the city of Somerville, Massachusetts. A local newspaper article provided the details along with a number of compelling (and revealing) quotations from the parties involved. (1)

The issue was that a high school student in special education was denied the opportunity to participate in a summer soccer camp attended annually by members of his high school soccer team. The school district had decided that the student, who was an active member of the team, must have an aide accompany him to the camp to act as a chaperone. Every year, the school didn’t seem to be able to locate a suitable one.

Though the parents (and grandparents) had offered to accompany their son and act as a chaperone, the school refused to consider their offer, telling them that they were not qualified. The parents then offered to pay for an aide that the school approved, but the school would not discuss their offer with them.

The result was that their son was not allowed to attend the camp with his teammates.

Each year was the same story. The parents would call school officials, including the district’s director of special education, asking to arrange for their son to attend soccer camp, and each year no one from the school would return their calls.

Finally, the summer before their son’s senior year, not knowing what else to do, the parents contacted the city’s disability coordinator, a person who worked for the city and not for the school system. Within days of this contact, and to the complete surprise of the family, the school managed to find a suitable aide.

The article quotes the district’s assistant superintendent as saying: “I think the school department has gone above and beyond, we’re really pleased to be able to send [the student to camp],” while adding that the school was not legally required to provide access to an extracurricular program.

Fortunately for all children in special education, the assistant superintendent does not get to decide what the law requires.

Section 504 of the Rehabilitation Act of 1973 was explicitly written to protect individuals with disabilities from this sort of discrimination. One of the regulations authorized by this statute, 34 C.F.R. § 104.37, specifically refers to this situation:

“No qualified handicapped person shall, on the basis of handicap, be excluded from participation in, denied the benefits of, or otherwise be subjected to discrimination under any program or activity which receives Federal financial assistance.”

All students in special education who receive services under IDEA are automatically protected by Section 504. Had the parents known their rights about this basic protection, they would not have had to put up with years of frustration and gatekeeping by their school district.

It is always possible that the assistant superintendent was speaking out of a combination of ignorance and hubris, but it is not possible to believe that the special education department was unaware of the school’s obligation to this student. In fact, the school has the responsibility to inform all parents with children in special education of their rights, including this one, in writing. (2)

In addition to prohibiting discrimination against people with disabilities, Section 504 also contains a provision that permits the “prevailing party” in a lawsuit over a violation of the statute “to collect reasonable attorney’s fees as part of the cost of remediation.” (3)

We are sure that this possibility is one that the school district in question should devoutly hope the parents of the child described in the article do not pursue.

2.) 20 U.S.C. § 1415 (d). The statute says, in part, that a copy of the procedural safeguards available to the parents of a child with a disability shall be given to the parents at least once a year. What is more, the notification should be written in the native language of the parents if necessary. In all cases the notification should be written in an easily understood manner. Model procedural safeguards form. (accessed 6 September 2013)