From Parents Have the Power
to make Special Education Work 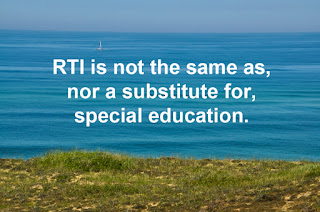 An article in a Massachusetts newspaper in 2013, entitled: “[Superintendent] Looking to Curb Sped Referrals,” (1) highlights a growing trend of school districts actively discouraging the referral of students for special education evaluations.

The article quotes a local school district superintendent as calling special education referrals “a resource zapper,” and requesting that instead, parents ask their child’s classroom teacher to decide if any concerns they might have about possible disabilities are valid. If the teacher agrees with the parents, then the teacher can refer the parent’s concern to a panel of “teachers and special education staffers.”

This panel then has the option to refer the child to a program commonly known as “Response to Intervention” or RTI. According to the superintendent, “... all I’m asking is for parents to work closer with the classroom teacher and keep a dialogue open, and wait for the teacher to go through the RTI process.”

To many parents, this may sound perfectly reasonable. Special education services cost money, so why shouldn’t the school district be able to decide what conditions to place on admission to it? The answer lies in the purpose for which RTI is being used and how it is implemented.

RTI is loosely defined in the regulations that accompany the 2004 reauthorization of IDEA (2) with the goal of screening all students early in their school career to identify any who are struggling and, through increasing levels of intervention, prevent the need for more costly special education services later.

By applying the screening process universally, it represents an effort to make IDEA, which addresses the unique needs of individual students, more closely conform with No Child Left Behind (NCLB), which attempts to raise standards for all students uniformly.

These techniques are applied in increasing levels of support, known as “tiers.” The progress of each student is monitored; if the initial tier of intervention isn’t working, the student is then referred to the next, more intense, tier.

IDEA doesn’t specify how many tiers a school must use (three tiers seem to be the most common), the criteria for deciding whether a tier is working or not, nor how long a student must stay in one tier before moving to another. All of these details are left to the individual states and school districts.

In other words, RTI is not the same as, nor a substitute for, special education. RTI does not provide for evaluations by qualified professionals to identify specific learning disabilities, and a student in RTI does not have an IEP to specify learning goals or the accommodations and modifications needed to achieve those goals.

Although some schools may employ these techniques, there is no requirement to do so. Most important, there is no legal mandate for a school to provide agreed upon services, accommodations, or program modifications, as there is when a student is on an IEP.

So, What’s the Problem?

Early screening of and intervention for all “at-risk” students regardless of the presence of a documented learning disability is a laudable and potentially cost effective way to improve public education. The problem arises when the reality doesn’t match the intention.

In the article mentioned above, the first thing to note is that the school isn’t screening all students as the RTI model is designed to do. The only students who are considered for the RTI program are those who are able to pass through at least three gates:

By contrast, IDEA has very specific criteria for determining eligibility for special education and who is qualified to make the determination. (4) Once parents request an initial eligibility evaluation and give their written consent for the necessary testing, the school has 60 calendar days (by federal law, state laws may vary) to perform evaluations in all areas of suspected disabilities. These evaluations must be performed by qualified and knowledgeable professionals.

There is no provision in IDEA for multiple layers of screening by people who may not have the training or qualifications to recognize or evaluate learning disabilities.

The inescapable conclusion is that the superintendent quoted in the article is attempting to use RTI in a manner for which it was not intended. Instead of an early screening tool for all students to identify the at-risk ones before they fall too far behind, he wants to use it as an alternative to performing special education evaluations only for those students whose parents have raised concerns and then are able to pass through two levels of “gatekeeping.”

This circumvents IDEA’s mandate that schools perform evaluations in all areas of suspected disability by qualified and knowledgeable professionals.

What is surprising is how clearly the superintendent admits this. When he calls the law’s evaluation requirements “a resource zapper,” he really means that his problem is the budget, as these resources cost money.

Rather than provide services according to need as the law requires, he is telling the community for which he serves as the head of public education that his goal is to protect the budget by not even attempting to identify the need, and therefore denying students in his care the public education that it is his job to provide.

The worst part of this admission, however, is the knowledge that the superintendent is not simply doing this out of ignorance of the law. For years, the Department of Education has warned schools not to use RTI to deny or even delay special education evaluations.

In a memo sent to all state special education directors in 2011, the Office of Special Education Programs (OSEP) wrote that, “... the use of RTI strategies cannot be used to delay or deny the provision of a full and individual evaluation… to a child suspected of having a disability…” (5)

This memo followed a 2006 memo that stated quite clearly: “An RTI process does not replace the need for a comprehensive evaluation.” (6)

How can it be possible that the superintendent is not aware of this widely publicized policy at the same time he is promoting RTI as an alternative to special education evaluations?

Unfortunately, this school superintendent is far from alone. Other school districts are adopting this policy and many are announcing it publicly. A more recent article from another town’s newspaper begins with a headline that announces that the district’s special education program is to be “culled” of excess students, as if the students were a herd of over-reproducing deer.

It is not clear from the article how the school administration was planning to remove students already in special education. That is a process that can only be done through extensive evaluations with objective data to prove that a previously identified learning disability no longer exists.

It is possible to have sympathy for those administrators and public officials who might have good intentions but who are caught in the dilemma of trying to balance available resources and the needs of students.

But, the gatekeepers who choose to keep their jobs and future pensions by protecting the school budget are not the ones who lose. It is the children with disabilities and the families who are struggling with these disabilities who get lost in the bureaucratic spin cycle.

This is why the state and federal special education laws were written, to give the most vulnerable and least powerful the right to a public education appropriate to their abilities. Parents need to understand these rights and not let those with agendas other than providing an appropriate education take these rights away.

3. “Questions and Answers On Response to Intervention (RTI) and Early Intervening Services (EIS)”

6. “An RTI process does not replace the need for a comprehensive evaluation” From Zirkel letter.